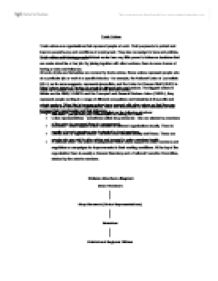 Trade Unions Trade unions are organisations that represent people at work. Their purpose is to protect and improve people's pay and conditions of employment. They also campaign for laws and policies, which will benefit working people. Trade unions exist because an individual worker has very little power to influence decisions that are made about his or her job. By joining together with other workers, there is more chance of having a voice and influence. All sorts of jobs and industries are covered by trade unions. Some unions represent people who do a particular job or work in a specific industry - for example, the National Union of Journalists (NUJ), as its name suggests, represents journalists, and the Union for Finance Staff (UNIFI) is made up of people who do different jobs in the financial sector. Other unions include a mixture of people in different jobs and sectors. The biggest unions in Britain are the GMB, UNISON and the Transport and General Workers Union (TGWU), they represent people working in a range of different occupations and industries in the public and private sectors. ...read more.

In exchange, members receive the benefits of representation, negotiation, protection and other services from their union. In 2003, union membership in Britain, estimated from the Labour Force Survey, was 7.42 million. The proportion of all employees who were union members was 29.1%. These are the overall figures but union membership varies enormously by industry and by the types of jobs that people do. Trade union membership has declined over the last two decades. In 1979 13.3 million people were members of trade unions and the proportion of employees who were union members stood at 55%. There are several reasons for this fall in membership, including: * A dramatic fall in the number of jobs in manufacturing industries where union membership was traditionally high * Larger numbers of unemployed people * A fall in traditional full time employment and an increase in part time and temporary workers who are less likely to join unions * An increase in the proportion of the workforce employed by small companies where it is often difficult for unions to organise * Hostile legislation - the previous Conservative government introduced laws, which make it more difficult for unions to operate and keep their members. ...read more.

Information and advice Unions have a wealth of information, which is useful to people at work. They can advise on a range of issues like how much holiday you are entitled to each year, how much pay you will get if you go on maternity leave, and how you can obtain training at work. Member services During the last ten years, trade unions have increased the range of services they offer their members. These include: * Education and training - Most unions run training courses for their members on employment rights, health and safety and other issues. Some unions also help members who have left school with little education by offering courses on basic skills and courses leading to professional qualifications. * Legal assistance - As well as offering legal advice on employment issues, some unions give help with personal matters, like housing, wills and debt. * Financial discounts - People can get discounts on mortgages, insurance and loans from unions. * Welfare benefits - One of the earliest functions of trade unions was to look after members who hit hard times. Some of the older unions offer financial help to their members when they are sick or unemployed. ...read more.