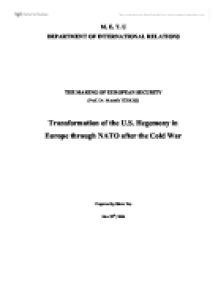 Transformation of the U.S. Hegemony in Europe through NATO after the Cold War

M. E. T. U DEPARTMENT OF INTERNATIONAL RELATIONS THE MAKING OF EUROPEAN SECURITY (Prof. Dr. Mustafa T�RKES) Transformation of the U.S. Hegemony in Europe through NATO after the Cold War Prepared by Sinan Tas Mar 29th, 2006 CONTENTS Contents Abstract 1 1. Introduction 1 2. United States' Security Hegemony in Europe in Post Cold War Period, the Challenges and the Transformation of Hegemony 2 Establishment of the United States Security Hegemony 2 The Rising Challenge: The Background of the ESDP 4 Transformation of the U.S. Hegemonic Project in Europe 5 Berlin and Brussels (1996) Foreign and Defense Ministerial Meetings 7 Amsterdam EU Summit (1997) and St.Malo Summit (1998) 9 U.S. Response to the Challenge and Washington Summit (1999) 10 Afterwards 11 3. Conclusion 14 References 16 Abstract This study argues the U.S. prolonged hegemony efforts in Europe after the Cold War. What were the changing conditions with the end of the Cold War, How did this change effect the U.S. involvement within the European Security Architecture, What are the U.S. interests in this involvement and finally What has the U.S. done to maintain its security hegemony, which it established during the Cold War? were some of the leading questions addressed in this study. In order to analyze the continuities of this hegemonic project, first we will see how the U.S justifies its existence in Europe with the changing conditions. Then we will further analyze what the U.S. policymakers have done in order to maintain the hegemony. This process will be classified as the transformation and redefinition of the roles of the institutions but mainly NATO since it was the most effective tool for the transatlantic security efforts of the U.S. The reactions of some of the European Union members will show the reader the conflicting views and how they were negotiated in several meetings, culminating in the last decade. Finally, we will argue that the U.S. ...read more.

The U.S. put her drawback into the final statement. NATO assets would be available to WEU, which enabled it as a militarily effective organization for the first time, however this distribution should not impair NATO's capacity to act and it should not create two NATOs. 1996 meetings came to life through two initiatives. The first one was NATO's 1994 initiative, which decided that NATO would stand ready to make its collective assets for alliance available. The second initiative came from the U.S. presidency, which was promoting the common foreign and security policy of Europe. The main decisions taken with the Berlin declaration and confirmed with Brussels meeting were as follows: - The identity of European Security and Defense Identity should be built within NATO, which would enable the European Allies to make more coherent and effective contribution to the activities of NATO. - EU would make operations through WEU. In the operations, WEU would be able to utilize NATO's Combined Joint Task Force providing that NATO's capacity would not be impaired. Appropriate planning would also permit militarily coherent and effective forces that would be capable of making operations under political control and strategic direction of WEU.16 - NATO members like Turkey and Norway could participate in WEU-led operations if they want to. Meetings paved the way for the WEU-led operations, created "separable but not separate" ESDI within NATO, allowed ESDI to take the initiative in Combined Joint Task Force and finally permitted all the European members of NATO to take part in the WEU-led operations. There was also an agreement that NATO would remain the main body for common security objectives and consultations. As a summary, NATO's primacy and the role played by The United States were recognized in post-cold war era European security. Another emphasis was to a single multinational command structure in order to have the unity of the command. Obviously, there was no need for two NATOs and anything that has the potential of impairing the capability of NATO was addressed in these meetings. ...read more.

However, U.S. defined soft areas as of the usage of autonomous action, prospective European military capability outside of alliance, lack of resources of the European states for more commitment in capability building, the unfair conditions for non EU NATO members, raising challenge of EU in transatlantic relations and duplication of the efforts. These areas would later on provide the zones of negotiations regarding American role in the new Europe. The negotiations are still continuing. One of the tendencies in the negotiation process is the increasing autonomy in European Security and Defense policies and institutions. NATO's primary role concerning article V missions of collective self-defense provides the legal framework for its existence in Europe. Through defining the 'political role' of NATO for the new security challenges24, the U.S. confirmed its role as a permanent European power of the early 21st century. Efforts for the reunification of Germany in NATO, modernized command structure for the new threat perception such as failing states and terrorism, increased bilateral relations such as Partnership for Peace and Euro-Atlantic partnership initiatives, strategic partnership with Russia and relations with Ukraine and finally NATO's two operations in Europe in the last decade solidified this authentication while serving to the U.S. interests in the long run. The European Security is convoluted with NATO, together with Organization for Security and Cooperation in Europe (OSCE) and the Council of Europe. Today's formulation consists of NATO as the primary institution for the collective self-defense of the EU, despite the increasing autonomous nature of ESDP through new institutions such as European Defense Agency (EDA). ESDP will contribute to the trend of further integration of Europe by many aspects. What the U.S. thrive to do now is to establish a more harmonized ESDP that do not conflict with NATO's existence and goals as much as possible. However, at least for the near future, the U.S. existence and its role in the new security architecture have obtained a stable place through negotiations and the developments of the last decade. ...read more.