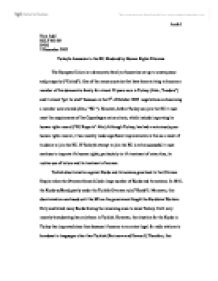 Turkey's Accession to the EU Hindered by Human Rights Dilemma

Nora Adel ECLT102-08 E4D2 3 December 2005 Turkey's Accession to the EU Hindered by Human Rights Dilemma The European Union is a democratic family of countries set up to create peace and prosperity ("United"). One of the many countries that have been striving to become a member of this democratic family for almost 50 years now is Turkey (Ahto ,"Leaders") and it almost "got its wish" because on the 3rd of October 2005 negotiations on becoming a member were started (Ahto, "EU "). However, before Turkey can join the EU it must meet the requirements of the Copenhagen entry criteria, which include improving its human rights record ("EU Reports" Ahto).Although Turkey, has had a notoriously poor human rights record , it has recently made significant improvements in this as a result of its desire to join the EU. If Turkey's attempt to join the EU is to be successful it must continue to improve it's human rights, particularly in it's treatment of minorities, its routine use of torture and its treatment of women. ...read more.

One recent improvement in Turkish Armenian relations is the Black Sea Economic Co-operation meeting because it forces Turkish officials to come to points of agreement with the Armenians. In order to allow the European Union to accept Turkey into its circle of members it will have to acknowledge the Armenian Genocide. In addition, Turkey's government system in the past allowed the torture of prisoners during interrogation and punished them during their time in prison. Therefore, "more than four hundred Turkish citizens died in custody" after 1980 ("Turkey"). This and other horrendous events led to the European Union questioning Turkey's Human rights record and that is one of the main reasons why the EU started passing the "penal code" to regulate(Smith). Yet again Turkey has improved because after 1997 it created new laws hoping it would lead to its alignment with the other members of the European Union and improve its prospects for joining the EU ("Eradicating Torture"). Despite the fact that those laws were implemented with the new penal code in mind, they were not fairly carried out by the Turkish government and at times, they were neglected ("Eradicating Torture" 4). ...read more.

the European Union as being "funded on the principles of liberty, democracy, respect for human rights and fundamental freedoms and the rule of law" (Pavaan-Woolfe). If Turkey is to join the EU Turkey it will have to stop discriminating women which will not be easy, however, because this has been a basic part of Turkey for a long time and so real change will take time (Pavaan-Woolfe). To do this Turkey will have to educate people more on women's rights since it already has begun an "awareness raising event" in 2004 (Pavaan-Woolfe). Gradually, this will change Turkey's harsh attitude towards and harsh view of women. Further, the Turkish government must see to the full implementation of the Law for Family Protecting, which defends most importantly women from "spousal abuse" and the Civil Law that prevents discrimination of women by families (Pavan-Woolfe). Thus, Turkey will have to tackle its human right issue though it might take some time in order to redeem itself in the eyes of the European Union Committee. This means that the European Union has to combat discrimination of minorities, women and mistreatment of prisoners. ...read more.