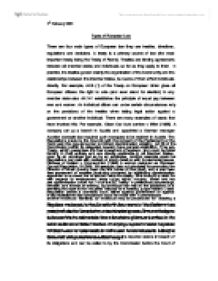 Types of European Law There are four main types of European law they are treaties, directives, regulations and decisions. A treaty is a primary source of law (the most important treaty being the Treaty of Rome). Treaties are binding agreements between all member states and individuals so far as they apply to them. In practice, the treaties govern mainly the organization of the Community and the relationships between the Member States, but some of them affect individuals directly. For example, Art.8 (1) of the Treaty on European Union gives all European citizens the right to vote (and even stand for election) in any member state also Art.141 establishes the principle of equal pay between men and women. An individual citizen can under certain circumstances rely on the provisions of the treaties when taking legal action against a government or another individual. There are many examples of cases that have involved this. For example, Clean Car Auto service v Wien [1998]. ...read more.

The judge applied Council regulation 1612/68, which is quite clear on the matter where vocational training is concerned, and granted the declaration sought. Directives are issued by the Council with the consent of the Parliament, or occasionally by the Commission under delegated powers. They are binding as to the result to be achieved, but leave the choice of form and method to the individual Member States. Directives are binding on member states but not on individuals, and cannot generally be relied upon in domestic courts. A Member State which fails to implement a Directive by the required date is in breach of its obligations and can be called to by the Commission before the Court of Justice. When a member state persistently fails to comply with a Directive, the Court of Justice has power to impose a financial penalty. The amount of any penalty imposed depends on three factors: the seriousness of the breach, including its effects on private and public interests; the member state's ability to pay; and the duration of the infringement, which is taken into account by setting the penalty at a fixed rate per day until compliance is secured. ...read more.

Once the time limit for the implementation of a Directive has expired (but not before), an individual can rely on the provisions of a Directive against their government. Decisions differ from Regulations in that they generally concern specific people or institutions. They can be addressed to Member States, to corporations or to individual citizens and are made by the council or commission as a formal method enunciating policies or initiating actions. An example is Council Decision 89/469, concerning certain protective measures relating to Bovine Spongiform encephalopathy in the UK which was adopted in the wake of the 'mad cow' disease scare .Like directives; decisions have a direct effect against a 'public body'. Examples of cases that involve this are Grad V Finanzamt Traunstein [1971]. A Council Decision addressed to all member states set out procedures and timetables for the introduction of a uniform system of calculating "turnover tax". A company complained that the German authorities had not yet introduced this system; the Court said the Decision was sufficiently clear and precise to have direct effect. ?? ?? ?? ?? 5th February 2005 ...read more.