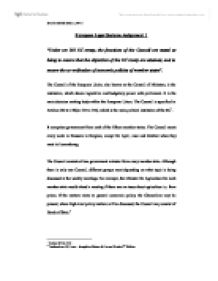 &quot;Under art 202 EC treaty, the functions of the Council are stated as being to ensure that the objectives of the EC treaty are attained, and to ensure the co-ordination of economic policies of member states&quot;.

European Legal Systems Assignment 1 "Under art 202 EC treaty, the functions of the Council are stated as being to ensure that the objectives of the EC treaty are attained, and to ensure the co-ordination of economic policies of member states". The Council of the European Union, also known as the Council of Ministers, is the institution, which shares legislative and budgetary power with parliament. It is the main decision making body within the European Union. The Council is specified in Articles 202 to 210(ex 145 to 154), which is the main political institution of the EC1. It comprises government from each of the fifteen member states. The Council meets every week in Brussels in Belgium, except for April, June and October when they meet in Luxembourg. The Council consists of one government minister from every member state. Although there is only one Council, different groups meet depending on what topic is being discussed at the weekly meetings. For example, the Minister for Agriculture for each member state would attend a meeting if there was an issue about agriculture i.e. ...read more.

* They co-ordinate the general economic policies of the member states every year. These are then made into a recommendation and the council supervises their implementations by member states.3 * The power of the purse4 - shared by parliament. Parliament supervises spending by the European Union and also adopts the annual budget for the EU. When it comes to spending on Agriculture and spending arising from international agreements, Parliament can add modifications, but the Council always has the final say. The number of council meetings held varies according to the urgency of the subjects dealt with. The General affairs, Economic and financial affairs and Agriculture Councils meet once a month, while the transport, Environment or Industry Councils meet two to four times a year.5 The Council sessions are often very long and frequent6. Only the members of the Commission have access and the right to speak. To ensure transparency, the Edinburgh Summit of 11th - 12th December 1992, introduced the possibility of public debates. The Council then changed its rules of procedure and now certain sessions are open and available to the public and could be broadcasted.7 In 1994, the Council held around roughly 100 formal ministerial sessions, during which it adopted about 300 regulations, 50 directives and 160 decisions.8 There are three different ways of voting. ...read more.

The main powers that the Council holds are defined in art 202 as economic policy co-ordination, decision making and conferment of implementing powers on the commission.15 In the context of the Treaties of Rome, the council is the ultimate legislative body. But under the CS Treaty, it is mainly known as a consultative body. In some ways the Council acts in the same way as a government, as it authorises negotiations to take place, confers on the commission the power to sort out international agreements and decides if they need to be concluded or not. In art 208 EC it states that the Council may ask the Commission to do any issues that the Council thinks is worth for the attainment of the common objectives and submit it in suitable proposals.16 The council also fixes the wages of the commissions, judges and registrars of the ECJ. The role of the Council of the European Union under pillar 3 has diminished as a result of the transfer of visa, asylum, immigration and other policies17 which are incorporated into the free movement of people necessary to the area of freedom, security and justice from pillar 3 to the EC Treaty. ...read more.