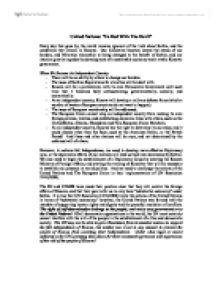 United Nations: "In Bed With The Devil" Every day that goes by, the world remains ignorant of the truth about Serbia, and the conditions that remain in Kosova. Our Collective Inaction leaves the status of our borders, and Mitrovica vulnerable to being changed to the benefit of Serbia, and our inaction greatly impedes the development of a sustainable economy and a viable Kosovar government. When We Become An Independent Country: - There will be no ability by others to change our borders. - The issue of Serbian Reparations for atrocities will be dealt with. - Kosova will be a protectorate, with its own Democratic Government until such time that it becomes fully self-sustaining; governmentally, socially, and economically. - As an independent country, Kosova will develop a military defense force (which a number of western European countries do not want to happen). - The issue of European membership will be addressed. - The European Union cannot stop an independent country from making its own foreign policies, treaties, and establishing economic links with others, such as the United States, Albania, Macedonia and Non-European Union Members. - As an independent country, Kosova has the right to determine its currency, and it could choose other than the Euro, such as the American Dollar, or the British Pound! ...read more.

no difficulty imposing their self-determined Sanctions of "No Arms," and "No Independence" on Kosova; a defenseless Kosova that they created through disarmament. UN 1244(1999) is a compromise to serve the self-interests of Nations and organizations that have a political and economic stake in Serbia, and will benefit from Kosova remaining under Serbian Dominance. Compromises are understandable, especially in order to achieve a "cease fire" and bring the parties together to find a peaceful solution. However, compromise is unacceptable when it ignores the people who were oppressed, and acts on behalf of the oppressor who has a long history of aggression against the people in the Balkans. There was some obvious recognition of the severity of Serbian atrocities against ethnic Albanians in Kosova as shown by the fact that the UN set a tremendous precedence when it authorized the establishment of a UN Government in Kosova with a goal of aiding the establishment of: ".. provisional democratic self-governing institutions to ensure conditions for a peaceful and normal life for all inhabitants of Kosovo." However, the largest Democratic Organization in the world is running the "government" of Kosova as a "Dictator," suppressing the will of over 90% of its inhabitants, while it proclaims that this is being done in the name of freedom and the protection of human rights and dignity. ...read more.

The United Nations, the European Union, and humanitarian organizations minimize the death and destruction created by the Serbian Government, its Church and its people. The process of Appeasement continues to override Morality, and Accountability as Nations focus on Regional Economic and Political issues impacting their countries self-interests. Propaganda, and outright control of the media is designed to create a very different picture to the Citizens of the World than is actually present in Kosova. It is time for the UN and the EU to "get out of bed" with the "Devil," and stop opposing and undermining the will of the Kosova people! It is time for the UN and the EU to realize they have no International Legal Authority to prevent our current Government from establishing laws and representing the will of the people. It is time to send the behavior of the UN, the EU and Serbia to The Hague, and have the "dishonorable" trials of Ethnic Albanians replaced by honorable prosecution of the real enemies of freedom and human rights; Serbian atrocities and European Appeasement. We ask that the United States, Great Britain, and Germany and Japan; historical enemies, now allies; to come together in the name of morality; support the inalienable right of self-determination; stop the immoral Appeasement of the EU and the UN; and help to bring Serbians into the world of humanity, as the world did for Germany and Japan, by holding Serbia accountable. We Have Everything To Lose, And Everything To Gain. ...read more.