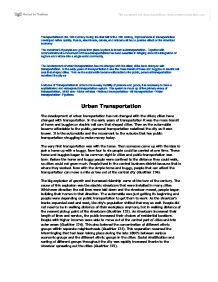 As always with the government, the ideas were not to make things right before they go bad, but to try and fix things once they have gone bad. That would be the basis on federal aid throughout the decades leading up until present time. President Kennedy addressed the need for public transportation in a national transportation message delivered in 1962. It appeared that help was on the way for the transit industry that was falling quickly into red ink. At the time the industry was still marginally profitable, but it took two years for legislation to be passed. The help that public transportation needed came in the form of the Urban Mass transportation Act of 1964 and its amendments that came in 1966. The Act of 1964 was the cornerstone of the federal transportation program. The government finally realized how hurt the public transportation industry was due to the federal spending on highways. The 1964 transit legislation was to help build equity in federal money spent on transit and highways (Smerk 91). Most of the aid came in the form of grants and loan programs. The focus was to keep public transportation in the private sector, as 95 percent was private in 1964. The equity between highway and transit could never be met though; by the way it was thanks to the federal aid toward highways that had transit in the situation it was in. The acts to help public transportation generated 375 million dollars, during the same time federal aid for highways was $24 billion (Smerk 94). Public transportation was so far behind highways by the mid 1960's, not only in the federal aid sector but also in the minds of the people. In less than two decades, American's had fell in love with their cars. The car was easy and affordable. It got people where they wanted to go, when they wanted to be there. ...read more.

While steamboats sparked the economy on the western frontier, canals became increasingly popular on the east coast. Although expensive ($25,000 per mile), and difficult to build, canals were an important source for those farmers and merchants who needed a cheap method of inland transportation. The water allowed horses, once only able to pull a ton of materials, to now pull over a hundred tons with the same amount of work. These canals were not only economical for exporters, but also for the state. Tolls alone collected from the Erie Canal had, by 1825, already paid for the entire project ($7,000,000), and now was making a substantial amount of profit. Even though it had not totally expanded yet, the cheapest, most economical method of transportation was the railroad. Speed, durability, and safety all contributed to the success of it. State legislatures and the national government all provided aid to the railroad companies by decreased the tax on rail iron. During this time period, manufacturing also boomed. New ideas and inventions made it faster to produce products. However, it is because of these new modes of transportation that this was ever able to occur. The cotton gin, invented by Eli Whitney, would never have been able to develop fully if the transportation system did not make it easy to obtain cotton from the south. With these new technological breakthroughs, American economic growth was significantly increased. By allowing cheaper importation and exportation of goods, manufacturers were able to produce more of these products. Also, it opened new markets to different places. In the northwest, where coffee was an expensive luxury (costing almost seventeen cents per pound), it was now a common item. The steamboat reduced the price by over thirteen cents. Also, our new transportation system helped other regions work together. And aside from material items, our country benefited economically from tourism. Any tourist to the New York area would not miss "The Great Western Canal." So although manufacturing did have a significant role in developing the American economy, it is because of transportation that manufacturing could have ever improved. ...read more.