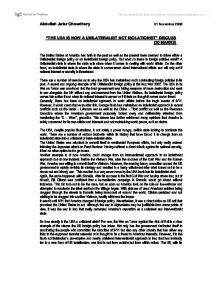 “THE USA IS NOW A UNILATERALIST NOT ISOLATIONIST” DISCUSS

The United States of America has both in the past as well as the present been deemed to follow either a Unilateralist foreign policy or an Isolationist foreign policy. But what do these to foreign policies entail? A Unilateralist state is where the state acts alone when it comes to dealing with world affairs. On the other hand, an Isolationist state is where the state is unconcerned about international affairs and will only act if national interest or security is threatened.

There are a number of reasons as to why the USA has maintained such contrasting foreign policies in its past. A recent and ongoing example of its Unilateralist foreign policy is the Iraq War 2002. The USA in its War on Terror was convinced that the Iraqi government was hiding weapons of mass destruction and went to war alongside the UK without any endorsement from the United Nations. Its Isolationist foreign policy comes into action if and when its national interest is served or if it feels as though it comes under threat.

Generally, there has been an isolationist approach to world affairs before the tragic events of 9/11. However, it would seem that even after this, George Bush has maintained an isolationist approach in recent conflicts such as the Israel – Lebanon war as well as the China – Tibet conflict as well as the Rwandan Genocide where the American government purposely looked away and deliberately refrained from mentioning the “G – Word”, genocide. This stance has further reinforced many opinions that America is solely concerned for its own affairs and interests and not maintaining world peace, as it so claims.

The USA, despite popular illustrations, is not solely a power hungry, selfish state looking to dominate the world. There are a number of various incidents within its history that have forced it to change from an isolationist state into a unilateral or interventionist state.

The United States was reluctant to commit itself to continental European affairs, but only really entered following the Japanese attack on Pearl Harbour. Having suffered a direct attack against its national security, it had no other option but to go to war.

Another example is of how America could change from an Interventionist approach to an isolationist approach due to one incident. Before the Vietnam War, after the success of the Cold War and the Korean War, America was willing to commit itself to Vietnam. However, the ensuing heavy casualties caused the US government to rapidly re-think its strategy and resulted in a hasty withdrawal after what turned out to be a drawn out and bloody war.  This resulted in a very sever move by the USA back into its isolationist shell.

Again, the same happened with Somalia. After its success in the first Gulf War and having driven Iraq out of Kuwait, Bill Clinton was confident that a humanitarian campaign in Somalia would go ahead without incidence. This did turn out to be the case, but as soon as America took on the role as law-enforcer and attempted to eradicate the tribal warlords the killings began. With pictures of dead American soldiers being dragged through the streets in Somalia being broadcast all around the world, Clinton panicked and not wishing to be dragged into another Vietnam, hastily withdrew the troops.

It wasn’t until 9/11 that America changed it foreign policy. Nevertheless, it was a direct strike on US soil that provoked the United States to act. Although the war in Afghanistan may be justifiable from some points of view, it was the war in Iraq that really cemented America’s reputation as a unilateral and interventionist state.

So how exactly is the USA a unilateral state? For one, the War on Terror against the Axis of Evil is a clear example of the stance the US foreign policy has taken. Not only has the government dedicated itself to eradicating the people who committed the atrocities of 9/11 but also any other country that has either any links to the supposed terrorist networks or is thought to be a threat to American interests. However, it is the Bush administration’s pre-emptive and nearly unilateral interventionist approach in Iraq that has ironically led to a new form of US isolationism, one that is not from outside but from within rather. The US, with its heavy-handed tactics, their unwillingness to negotiate and insulting rhetoric, the bush administration has alienated many traditional allies such as France and Germany. Anti-US sentiment is rife throughout the Middle East and also amongst Muslims everywhere, while all the time contradicting the notion that the US is playing a positive role on the international stage. It is this anti-US sentiment, particularly in the Middle East and amongst Muslims that have caused many people to regard the War on Terror as an interventionist “crusade” on Muslims and Islam and ultimately a “Clash of Civilisations” between the Islamic World and the West.

Another example of America’s unilateral interventionist foreign policy is the presence of military bases in every major strategic point within the world. Not least the Middle East where the US has more bases there than anywhere else in the world. Israel, Saudi Arabia, Iraq and Kuwait are just a few of the countries hosting American military personnel. With this not only can the Bush administrations keep a watchful eye on two of the countries of the Axis of Evil, Iran and Syria; but they have literally total command of all the major oil-fields in the region thereby always maintaining protection from a threat against US national interests, namely oil.

In conclusion then, even though for most of American history, the United States has been an isolationist nation which has stayed away from foreign entanglements it is George Bush’s isolationism that is the consequence of unilateral policies which have been perceived as both irrational and aggressive by most of the nations of the world. However, unlike the isolationism of pre-World War II America, it is much more difficult for America to remove itself from this new form of isolation. As a result, it is unclear how difficult it will be for the next president to undo the diplomatic damage created by George Bush. It seems as though an inherited incapability to negotiate has ensured the United States will remain isolated from the rest of the civilised world until he is no longer president. And judging by the overwhelming sentiment not only from the world but also from within America, it seems as though people are waiting impatiently for that day to come.