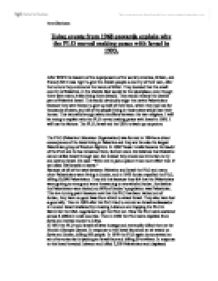 Using events from 1968 onwards explain why the PLO moved making peace with Israel in 1993.

Using events from 1968 onwards explain why the PLO moved making peace with Israel in 1993. After WW2 the leaders of the superpowers of the world (America, Britain, and France) felt it was right to give the Jewish people a country of their own, after the horrors they endured at the hands of Hitler. They decided that the small country of Palestine, in the Middle East would be the ideal place, even though there were many Arabs living there already. They would rename the Jewish part of Palestine Israel. This would obviously anger the native Palestinians because they were forced to give up half of their land, which they had had for thousands of years, and all of the people living in those areas would lose their homes. This naturally brought about conflicts between the two religions. I will be trying to explain why the PLO moved making peace with Israel in 1993. I will use the factors: The PLO; Israel and the USA to back up my points. The PLO (Palestine Liberation Organisation) was formed in 1964 as a direct consequence of the Jews living in Palestine and they are the also the largest Palestinian group of freedom fighters. In 1968 Yasser Arafat became the leader of the PLO and he has remained there, forever since. He believes that Palestine cannot defeat Israel through war, but instead they should use terrorism to try and destroy Israel. ...read more.

In 1993 the Israelis new PM, Rabin, agreed to negotiate a peace deal with the PLO. This peace deal consisted of: * The recognition of each other * Israel will hand over some limited self rule to Palestine * Talks would begin to discuss the removal of Israeli troops * Palestinian elections But on 13th December Israeli troops failed to withdraw from the Gaza strip as previously agreed. If we look at the way that Israel retaliated to the acts of terrorism by the PLO we can see that the casualties that the Palestinians suffered as a result of Israeli reprisals are far worse than the Israeli casualties at the hands of the PLO. This almost certainly changed Yasser Arafat's mind about how to get Palestine back. Also Israel's new Prime minister helped towards Yasser Arafat changing his mind as he promised that he would try and negotiate a peace deal between Palestine and Israel. Also the fact that terrorism is condoned probably changed Yasser Arafat's mind about the way he tries to help his people. This is because he probably realized that while he was conducting terrorist attacks, the rest of the world would be less likely to help the Palestinians in their plight. In 1968 Israel's stance on the PLO was very negative. For example they refused to recognise the PLO's existence; they refused to negotiate with the PLO over any peace deals and there was to be no compromise over land. ...read more.

In 1991, the Madrid Peace talks were arranged and sponsored by the USA and Russia and these peace talks consisted of direct talks between Israel, Palestinians, Jordan, Syria and Lebanon. These peace talks would probably help the final peace agreement in 1993 and again the USA was directly involved. I think that there were a lot of reasons why the PLO moved towards making peace with Israel and some of these are: * The expulsion of the PLO by many countries such as Jordan and Syria. * The number of casualties the PLO suffered as a result of Israeli reprisals. * The direct involvement of USA when trying to negotiate a peace deal. But I think that the most important one was that Yasser Arafat realised that his terrorist attacks were not really doing any damage to Israel and that Israel's attacks were doing an enormous amount of damage to Palestinian morale and the nation as a whole. But, the fact that the PLO were being expelled or driven out by the Israelis, from any country that they tried to establish a base in, also contributed to Arafat's change of heart. For example the PLO were getting weaker and weaker as they were spread out across the Middle East and North Africa because they were getting further away from Palestine and therefore couldn't launch effective attacks on Israel. So I think that when Arafat made a peace deal, it was only because he felt that if he didn't, then the Palestinians would never be able to get their homes back. Tom Charleson ...read more.