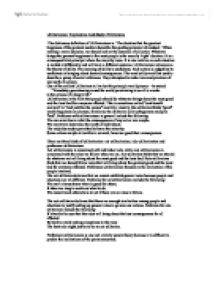 Utilitarianism: Explanation And Study of Criticisms

Utilitarianism: Explanation And Study of Criticisms The dictionary definition of Utilitarianism is: 'The doctrine that the greatest happiness of the greatest number should be the guiding principal of conduct.' When making a moral decision, we should look at the outcome of an action. Whatever brings the greatest happiness to the most people is the morally 'right' decision. It is a consequentialist principal where the majority rules. It is also relative as each situation is looked at differently and will have a different outcome. Utilitarianism is known as the theory of utility. The meaning of utility is usefulness. Each action is judged by its usefulness in bringing about desired consequences. The word utility was first used to describe a group of social reformers. They attempted to make laws and practices of use-useful to people. One of the earliest Utilitarians to live by this principle was Epicurus - he stated: "Friendship goes dancing round the world proclaiming to us all to awake to the praises of a happy life." Utilitarianism is the view that people should do whatever brings about the most good and the least bad for everyone affected. This is sometimes called "cost-benefit analysis" or "end justifies the means" morality. Usually, the utilitarian thinks "good" means happiness or pleasure. Similarly, the utilitarian calls unhappiness and pain "bad". Problems with utilitarianism in general include the following: We can never know what the consequences of any act or rule maybe. We may try to determine the worth of individuals. The majority maybe permitted to harm the minority. Some actions maybe to terrible to commit, however good their consequences. There are three kinds of utilitarianism: act utilitarianism, rule utilitarianism and preference utilitarianism. Act utilitarianism is concerned with individual acts, while rule utilitarianism is concerned with the rules we follow when we act. Act utilitarians think that we should do whatever act will bring about the most good and the least bad. ...read more.

Its purity Its extent (the number of people affected by it. He believed that a good life was one with pleasure and the absence of pain. The other exponent of Utilitarianism is John Stuart Mill. He had a strict upbringing having very little contact with the outside world. He was around intelligent people a lot of the time as his father's friends consisted of philosophers, politicians, and economists-one being Bentham. He joined the Utilitarian Society, which met at Jeremy Bentham's house - this is where Mill became interested in the theory. Two of his important books were 'On Liberty' in 1859 and 'Utilitarianism' in 1861. Mill wanted to modify Bentham's theory of Utilitarianism to make it more acceptable. There were a number of things Mill did to change Utilitarianism. Bentham suggested that all pleasures were of equal value; no pleasures were higher or lower than others. This evoked criticism so the main point he made was that of changing qualitative pleasure to quantitative pleasure. He divided pleasure into two, higher and lower. The higher pleasures were associated with the mind, and the lower pleasures with the body. Once the basic lower pleasures of the body (food, water etc.) have been reached, we can then go in search of higher, intellectually challenging pleasures. Mill said: "Better to be a human dissatisfied than a pig satisfied; better to be a Socrates dissatisfied than a fool satisfied." Mill also linked Utilitarianism with Christian morality. He connected the theory with the teachings of Jesus. He said that the 'ideal perfection of utilitarian morality' was abiding by the 'Golden Rule'-'Do onto others as you have them do to you.' This made many more people accept Utilitarianism as it linked with their religion. Mill introduced rules into Utilitarianism. The rules introduced were ones that generally brought about the greatest happiness for the greatest number. For example, Mill argued that society needs the principal of truthfulness as it brings the most happiness on the long run. ...read more.

Surely it is better for a hundred people to be happy than five. There are other ethical theories that have many rules you have to learn and abide by. Utilitarianism has one simple absolute, which can be applied to all situations with a positive outcome. In times of difficulty, it eases people out of difficult situations. They cannot be blamed for making the wrong decision if they claim it was for the happiness of the majority Prejudices the decision maker may hold are eradicated in Utilitarianism, as they have to stick to the main rule. There is some flexibility for emotions in moral decision making according to Rule Utilitarianism. This strand of the theory allows respect for the rules that are created to better our society. Even these rules do not have to be kept all the time if you are a weak rule Utilitarian. Some people would see this kind of Utilitarianism more compassionate than Act Utilitarianism. One of the main strengths is that it prevents the few people that think they better the rest from dictating society. Utilitarianism acts as a good weapon for reform. Utilitarianism is a theory that Christians can relate to. Mill brought it closer to the Christian church by introducing Rule Utilitarianism. This would be closer to the principals Jesus lived by. For example, it was against the Jewish law to work on the Sabbath but when people were in need, Jesus bent this rule and healed them. The largest connection Christianity has with Utilitarianism is the death of Jesus. He was crucified and died for the sins of mankind sacrificing himself for the majority. However, Utilitarianism does accept evil where Christianity most certainly does not. Philosophers like Bentham and Mill worked to produce a theory that could aid us make complex decisions with a desirable outcome. The different types of Utilitarianism make it easier to live by, yet it is hard not to let our emotions override our actions. Despite the many flaws in the theory, it is simple and easy to apply. Isobel Manley ...read more.