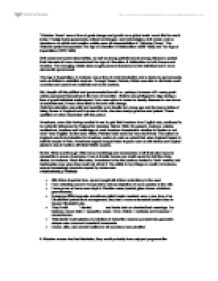 "Victorian Times" were a time of great change and growth on a global scale--much like the world today. Foreign trade agreements, cultural exchanges, new technologies, civil unrest, and an abundance of artistic and creative outlets were all characteristics of "Victorian Times." The Victorian period incorporates The Age of Liberalism & Nationalism (1826-1850) and The Age of Imperialism (1875-1900). Civil unrest and social class battles, as well as strong patriotic bonds among citizens to protect their interests at home characterized the Age of Liberalism & Nationalism in both Europe and America. The emerging middle class sought personal freedoms for the individual and a more democratic government. The Age of Imperialism, in contrast, was a time of world domination and a desire by governments such as Britain to establish empires. ...read more.

Victoria's education was solid and sensible; and, despite her young age and the heavy duties of being Queen of England and Empress of India, she was always gracious and poised. These qualities are often associated with the period. Americans, even after having revolted in war to gain their freedom from English rule, continued to be culturally influenced by England for decades. Before 1800, the speech, costume, cuisine, architecture, furniture and furnishings of most American households--whether in Boston or out west--were English. By the early 1800s, Parisian taste arose but was short-lived. The culture of England was firmly imbedded in American custom to such an extent that when England began to build its empire in Asia, Americans eagerly bought Asian imports such as silk fabrics and tropical plants to stay in fashion with their British cousins. ...read more.

* Fern collecting craze in Europe led to serious depletion of some species in the wild. * Ferns grown at home were kept in Wardian cases (sealed glass boxes--miniature greenhouses). * Nosegays (little bouquets sometimes called tussie-mussies) were a new form of an Elizabethan period floral arrangement; they had a more ornamental function than in Queen Elizabeth's day. * "Say it with flowers" started. Flowers and herbs took on standardized meanings. For instance, lemon balm = sympathy; roses = love; violets = modesty; and rosemary = remembrance. * "Standards" (not topiaries, but similar) of herbs like rosemary pruned into geometric shapes were common household ornaments. * Linens, silks, and colorful textiles for all occasions were plentiful. If Victorian women had had television, they would probably have enjoyed programs like HouseSmart with Lynette Jennings on the Discovery channel, Home & Family on the Family channel, and of course anything by Martha Stewart! ...read more.