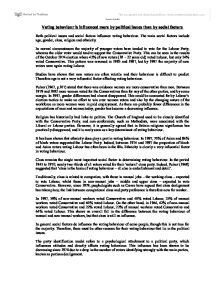 Voting behaviour is influenced more by political issues than by social factors Both political issues and social factors influence voting behaviour. The main social factors include age, gender, class, religion and ethnicity. In normal circumstances the majority of younger voters have tended to vote for the Labour Party, whereas the older voter would tend to support the Conservative Party. This can be seen in the results of the October 1974 election where 42% of new voters (18 - 22 years old) voted Labour, but only 24% voted Conservative. This pattern was reversed in 1983 and 1987, but by 1997 the majority of new voters were again voting Labour. Studies have shown that new voters are often volatile and their behaviour is difficult to predict. Therefore age is not a very influential factor affecting voting behaviour. Pulzer (1967, p.107) stated that there was evidence women are more conservative than men. Between 1979 and 1992 more women voted for the Conservatives than for any of the other parties, and by some margin. In 1997, gender differences had almost disappeared. This could be accounted for by Labour's election tactics to make an effort to win over women voters and also by the changing nature of the workforce as more women were in paid employment. ...read more.

Therefore, there must be other reasons for their voting behaviour that lie in the political issues. The party identification model refers to a psychological attachment to a political party, which influences attitudes and directly affects voting behaviour. This influence has been shown to be decreasing since 1970 due to a drop in the number of voters identifying strongly with the main parties, known as partisan dealignment. The rational choice model emphasises the significance of making rational decisions rather than emotional ones. Within this model there is the suggestion that people vote according to the issues directly affecting them; however it is difficult to find an exact link. It also suggests there is a connection between voters' political values, ideologies, and their voting behaviour. People can also vote for the party they judge most likely to raise or protect their present or future standard of living, or they might focus retrospectively on the parties' past records. Another, and increasingly significant, factor that could affect people's voting behaviour is their view of the competence of the party leader. I suggest that political issues nowadays influence voting behaviour more than social factors. Social factors used to be a lot more influential in the past, but as time has moved on their influence has decreased. ...read more.

In many rural and some suburban areas, the two party contest is really now between the Conservatives and the Liberal Democrats. There are far fewer marginal seats than before, which suggests that the country is more regionally polarised. 6. Party image has become critical. In particular the electorate does not vote for divided parties (Conservatives, 1997 and 2001) or for parties seen as extreme (Labour, 1983 and 1987). The image of the PARTY LEADER has become much more important too - so, for example, Kinnock (1992) and Hague (2001) did not LOOK LIKE prime ministers. 7. Tactical voting was a big feature of the 1997 and 2001 elections - i.e where voters support the party most likely to oust the Conservative incumbent. This has helped the Liberal Democrats to target seats and to achieve their largest number of MPs since the 1920s. People are also increasingly willing to vote for smaller parties if they feel passionately about a single issue - the Referendum Party (1997) and UKIP (2001) are obvious examples. 8. Turnout fell below 60% in 2001. This suggests a growing number of voters are alienated from ALL parties. Note also that many people vote very differently in non-parliamentary elections - for example, UKIP's support in the European Parliament elections gave them a dozen seats, the Greens have seats in the Greater London Assembly, etc. ?? ?? ?? ?? Azam Ayoubi ...read more.