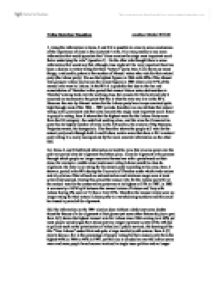 Voting Behaviour Questions Jonathan Mitchell 9/11/03 1. Using the information in items A and B it is possible to come to some conclusions of the importance of class in the electorate's vote. It is even possible to see some information that would speculate that "class remains the singe most important social factor underlying the vote" (question 1). On the other side thought there is some information that would say that although class might still be very important there has been a decline in voters voting for there "natural" party. Item A (1) shows us many things; a noticeable pattern is the number of Manual voters who vote for their natural party (the labour party). We see the highest figures in 1966 with 69% of the Manual vote going to Labour and we see the lowest figures in 1983 where only 37% of the manual vote went to Labour. In the 80's it is probable that due to the rise and consolidation of Thatcher in this period that manual labour votes declined due to Thatcher's strong hold over the working class, the reasons for this hold and why it occurred are surmount to the point that this is why the vote was low in the 80's. ...read more.

Therefore the manual voters were no longer voting for their natural Labour party in overwhelming numbers and this could be classed a period of de-alignment. 2b).The information on the 1997 election does without a doubt cast some doubts about the theory of a de-alignment at first glance yet some other factors do play a part. Item A(1) shows the highest manual vote for Labour since 1966 coming in at 60% yet most people would argue the Labour party no longer represent a party of the left due to policies such as the privatisation of virtually all public services, the donning of the title "New Labour" under Blair and quite a large inactivity with unions. Item A (2) clearly shows a fall in the percentage of people voting for their natural party from the highest 66% in 1966 to 46% in 1997, yet this also is clouded as over the last ten years more and more people have become involved in single issue politics and no longer alignment themselves to a particular party, this is called party de-alignment, and we always have to remember that the Liberals fall somewhere in between this middle class and working class, probably swaying more towards middle yet because they are not associated with one direct class there results can sometimes distort the information. ...read more.

I personally do not particularly agree with McNaughton's analysis of the reasons for a reform in the labour party, in fact items A and B prove him wrong in the sense that after Thatcher the manual vote for Labour began to rise again before the creation of Blair's term "New Labour", but in one sense one could say that the reforms within the Labour Party begun a long time before Blair renamed the party "New Labour", it is possible and very true to argue that "New Labour" existed long before that. However I propose that due to centralised politics across the globe the Labour and Conservative party would always consolidate its more left and right policies ,respectively, and move into the centre, I do not agree that this process took place due to a fall in the physical embodiment of the working class. McNaughton fails to account for the fall in the middle-class Conservative support that occurred during the 1979 - 1922 periods. In conclusion of the validity of these sector cleavages I would say to some degree they are still valid but the level of this validity is up for debate. ...read more.