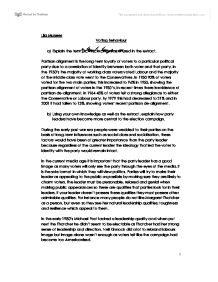 Partisan alignment is the long-term loyalty of voters to a particular political party due to a correlation of identity between both voter and that party. In the 1950’s the majority of working class voters voted Labour and the majority of the middle class vote went to the Conservatives. In 1950 90% of voters voted for the two main parties, this increased to 96% in 1955, showing the partisan alignment of voters in the 1950’s. In recent times there is evidence of partisan de-alignment, in 1964 45% of voters felt a strong allegiance to either the Conservative or Labour party. By 1979 this had decreased to 21% and in 2001 it had fallen to 13%, showing voters’ recent partisan de-alignment.

During the early post war era people were wedded to their parties on the basis of long-term influences such as social class and socialisation, these factors would have been of greater importance than the party leader because regardless of the current leader the ideology that led the voter to identify with the party would remain intact.

In the current media age it is important that the party leader has a good image as many voters will only see the party through the eyes of the media, it is the sole format in which they will view politics. Parties will try to make their leader as appealing to the public as possible by making sure they are likely to charm voters. The leader must be personable, relaxed and genial when making public appearances so these are qualities that parties look for in their leaders. If your leader doesn’t possess these qualities they must possess other admirable qualities. For instance many people do not like Margaret Thatcher as a person, but even so they see her natural leadership qualities, toughness and resilience which appeal to them.

In the early 1980’s Michael Foot lacked a leadership quality and when put next the Thatcher he didn’t seem to be electable as Thatcher had her strong sense of leadership and direction. Neil Kinnock did a lot to rebrand labours image but image alone wasn’t enough as voters felt like the campaign had become too Americanised.

In 1994 Tony Blair was a very successful choice of leader as he appeared youthful, dynamic and charismatic; he was an effective communicator on screen and portrayed the perfect image for Labour. Blair was able to appeal to the middle classes and women voters as well as holding on to some of the usual Labour voters. This led to him winning the 1997 general election by a landslide. Within his campaign he used a number of devices to win over voters; he made sure he seemed genuine about new Labour by introducing clause four, he convinced people he was personable, relaxed and genial on his many public appearances, he appeared in hospitals and schools getting the perfect photo opportunity. He was a great communicator and connected with people at the time of the election. He was backed by the press, and the general media and polls never portrayed him in a bad light. These factors combined made him the perfect leader in the eyes of the voters.

Overall in modern times it is very important to have a leader that is both liked and respected by the voters and someone who is a natural leader as voters choose a party based upon short term factors opposed to long term factors, and getting the leader right can prove important in your campaign as in the case of Tony Blair because it can lead to a majority win.

In the 1950’s when partisan alignment was apparent the factors for voting were very much different to how they are in present times. Short term factors were less significant to voters because it was the policies and political ideology of a party that were important. People would choose to vote on the basis of which party met their personal needs the best and which policies benefited them the most, rather than voting on the basis of the appearance of the party and their current leader. There was a clear divide between both the working and middle classes and the Labour and Conservative policies. In the 1950’s the parties had rather different stances on core issues to how they are in recent times. The conservatives were about freedom, the individual and status quo whereas the Labour party were about state intervention, equality and change. This clear political ideology made it easy for most people to vote on the basis of identifying with policies rather than image.

In modern times the main parties have rather similar policies on core areas like healthcare, education and crime. Although the parties have their basis in their old ideologies, it is not as clear cut as it used to be. This is also reflected in the way people vote as many voters are no longer wedded to a particular party. People vote on the basis of short term factors such as the economy, the leader, political issues and images and the impact of the media.

Party support in the 2005 election by social class (%)

In 2005 the social class divide was weaker than ever. The conservatives had the most of the share of A/B vote was down to 9% (it was 32% in 1992), though the A/B and C1s still remain a key part of the conservative vote. Even in a year where it hadn’t done well in comparison to the last two elections, New Labour was still able to get 28% of the A/B vote. Although it was very much behind the conservatives in the C1s it was well ahead among the C2s and D/Es.

Voters see the success of the economy in terms of the level of mortgage interest and inflation, and people are more likely to vote for a government which makes them feel good about the state of the economy, this was shown to be true in the 2001 election. The party leader is also a factor as Tony Blair proved in 1997 a good campaign and whiter than white image can be extremely beneficial to your election result. The Iraq war and loans for peerages scandal seriously affected his image and made voters seriously doubt his previous trustworthy and honest nature. The media has a big part to play in the election as they are the main outlet for the parties to get their message across. The broadcasting media is not bias and airs the party political broadcasts in which the leader directly addresses the public as to why you should vote for them. In Tony Blair’s party political broadcast he was trying to gain the public’s vote by using a slick modern style with soundbites such as ‘education, education, education’ and ‘tough on crime, tough on the causes of crime’, logo and theme music. Parties will always want the photo opportunity to show the public that they are honest, trustworthy and respectable, this is why they are often seen with children, at schools, hospitals etc to boost their credibility amongst voters. The press often play a role in the elections as they break out any political issues and sleaze and can portray one side as better than the other as they are often bias. In 1992 the majority of newspapers backed the conservatives, 7 backed them compared to just 2 for Labour by 2005 this had changed to 2 newspapers backing the conservatives and 8 supporting Labour. Newspapers provide people with a bias opinion of policies which some voters then use to form an inaccurate account of the party. Media influence can steer people to vote for a particular party, this combined with opinion polls can create a bandwagon effect and influence people to vote differently.

Overall people are more likely to take short term factors into account as they are not aligned to a particular political group, people are more likely to move from the main parties to 3rd parties because of this the electorate has become more volatile and unpredictable. When people vote they will take into account things like opinion polls, press and media coverage and sometimes end up with an inaccurate account of parties because of this many people vote differently than they would have done without these factors. Places like France ban opinion polls during the campaigns as it influences the vote. People in modern times vote for people more and more on the basis of short term factors.