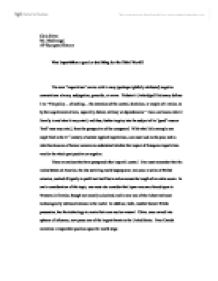 Was Imperialism a good or bad thing for the Third World?

Chris Ritter Mr. McGonigal AP European History Was Imperialism a good or bad thing for the Third World? The term "imperialism" carries with it many (perhaps rightfully attributed) negative connotations: slavery, subjugation, genocide, et cetera. Webster's Unabridged Dictionary defines it as: "The policy... of seeking... the extension of the control, dominion, or empire of a nation, as by the acquirement of new, especially distant, territory or dependencies." Now one knows what it literally is and what it may entail, and thus, further inquiry into the subject of its "good"-ness or "bad"-ness may entail, from the perspective of the conquered. With what little example one might find in the 21st century of current applied imperialism, one must look to the past, and to what has become of former colonies to understand whether the impact of European imperialism was for the whole part positive or negative. ...read more.

Perhaps the best example of post-colonial failures is with the nearly the entire continent of Africa. Josef Conrad, who wrote many stories involving the Dark Continent, wrote "Everything here is repellent to me," upon his arrival in the Congo-the sights of colonized Africa had sickened him to the core, and the supposedly high-minded ideals of the European imperialists, especially his own King Leopold II were reflected in Kurtz, from Conrad's most celebrated story, Heart of Darkness. (Along those same lines, the Francis Ford Coppola film loosely based upon that story, Apocalypse Now, did the same for the former French colony of Vietnam.) That was in the relatively tame days when the subjugated African nations had not been loosed upon themselves; since that time, several of those same nations have seen mass genocide and civil war follow in the wake of European withdraw. ...read more.

Rwanda is not alone, even when one confines one's view to the African continent. One need merely look towards the chaos of Liberia, Zaire, the apartheid of South Africa, and so on, to see nations left in shambles in the wake of European imperialism, raped of their natural culture. None of them possess any semblance of positive industry, social stability, or any of the other necessities needed for any nation to prosper. Therefore, what conclusions may one draw from this? The first is that the essay stem is unfair-by confining the subject matter to Third World nations, it immediately eliminates maybe positive possibilities and examples (as shown in the second paragraph) of post-colonial nations. Secondly, it leads one to hypothesize that perhaps many of the nations formerly part of far-flung European empires are worse off than they would be had they been left alone-but this, of course, is merely a theory. Imperialism certainly did not perform miracles for the Third World, and that is the only sure conclusion. ...read more.