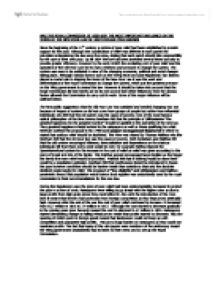 WAS THE ROYAL COMMISSION OF 1832-1834 THE MOST IMPORTANT INFLUENCE ON THE TERMS OF THE NEW POOR LAW OF 1834? EXPLAIN YOUR ANSWER

WAS THE ROYAL COMMISSION OF 1832-1834 THE MOST IMPORTANT INFLUENCE ON THE TERMS OF THE NEW POOR LAW OF 1834? EXPLAIN YOUR ANSWER Since the beginning of the 17th century a system of poor relief had been established to provide support for the poor. Although the coordination of relief was different in each parish the principles underpinning the law were the same, stating that each parish should take responsibility for the care of their own poor. Up till 1834 the law had been amended several times but only to provide greater efficiency. However by the early 1830's the escalating cost of poor relief and the operation of the Old Poor Law led to many criticisms and pressure to change the system. The system was seen to be outdated in view of the changing economic, political and social changes taking place. Although various factors such as the Swing Riots and post Napoleonic war distress played a crucial role In shaping the terms of the New Poor Law it was the work and determination of the Royal Commission to change the system, which put the greatest pressure on the Whig government to amend the law. However it should be taken into account that the Royal Commission did not merely act on its own accord but rather influences from the various factors allowed the Commission to carry out its work. ...read more.

It increased from �5.7 million in 1815 to 7.9 million in 1817. Although the cost started to decrease gradually in the coming years poor harvests caused the cost to plummet to �7 million in 1831. Ratepayers started demanding change as falling wheat prices meant that profits started to decrease. Also the opening of British ports to foreign goods meant that landowners could not keep up with competition and guarantee high profits. This put a huge burden on ratepayers as they could not maximise profits. The fact that many of the rate payers were members of the aristocracy meant the Whig government undoubtedly had to listen to their views and so set up the Royal Commission. As well as agricultural disasters there were other problems at the end of the Napoleonic wars. Many had expected the social and financial conditions to Improve after war. However the post war period led to greater distress as 400,000 demobilised soldiers returned to a bleak and rather unwelcoming situation. The fact that rural unemployment was increasing after the post war period meant that the return of the soldiers put an extra strain on an already shrinking labour market. As well as this many of the ex- soldiers were reluctant to find work where possible as they claimed they had a right to claim Poor Relief. Many of the Soldiers saw it as compensation to the hard work and trouble they had endured. ...read more.

Although all these factors called for a change in the system it was the royal commission which actually incorporated all the different factors to influence the terms of the new poor law. The fact that one of the most prominent members of the commission Edwin Chadwick was a disciple of Bentham meant that many of the Bentham Principles particularly Utilitarianism were integrated into the terms of the new act. Without the setting up of the Commission the pressures to change the system would have probably soon died out. The fact that even before the enquiry into the old Poor Law had been conducted the Commission knew what it was aiming for and had come to a conclusion meant that Undoubtedly decisions about the terms of the New Poor Law had been made. The Commission made many important recommendations which were used as the foundation of the New Law such as the setting up of a central authority, and the grouping of parishes as unions to decrease operating cost and increase efficiency. By weighing up the points it is clearly that the Commission was the biggest influence as most of the recommendations were used in the establishment of the New Poor Law. Nevertheless it was the pressure from the ratepayers as well as the working class which opted the Whig government to set up the Commission. Therefore it is right to conclude that the Royal Commission was the greatest influence on the terms of the New Poor Law but that the Commission itself was influenced by Various other factors. ...read more.