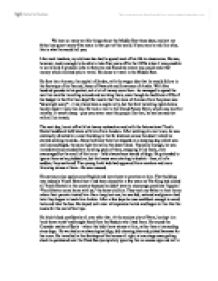 We hear so many terrible things about the Middle East these days, and yet my father has spent twenty-five years in that part of the world. If you were to ask him why, this is what he would tell you.

We hear so many terrible things about the Middle East these days, and yet my father has spent twenty-five years in that part of the world. If you were to ask him why, this is what he would tell you. Like most teachers, my old man has had to spend most of his life in classrooms. He was, however, lucky enough to be able to take five years off in the 1970s when it was possible to work hard at physical jobs in factories and foundries where you could make fast money which allowed you to travel. He chose to travel in the Middle East. He flew into Amman, the capital of Jordan, with the vague idea that he would follow in the footsteps of his 'heroes', Jesus of Nazareth and Lawrence of Arabia. ...read more.

About half-way there he stepped on a sleeping dog which was well-camouflaged, the same light brown as the desert sand. Typically enough, he was immediately surrounded by a howling pack of them, snapping at his heels, only encouraged by the smell of his terror - he'd always been scared of dogs. He pretended to ignore them as he plodded on, but his knees were starting to buckle - then, all of a sudden, they scattered! Two young Arab lads had appeared from nowhere and were throwing stones at them - He was rescued. His saviours also spoke some English and were keen to practice on him. That building was indeed a Youth Hostel but it had been closed for a few years as The King had closed all Youth Hostels in the country because he didn't want to encourage penniless 'hippies'. ...read more.

In Egypt, he hired a camel and rode around the pyramids, however inexpertly. In Egypt, another little lad came into his life. Grabbing his camel's bridle, the boy demanded money! My father refused. " I can make your camel very angry!" he threatened, blowing into its nostrils. The beast started bucking and trying to throw its inexperienced rider the fifteen feet to the hard ground below. This remains one of my dad's favourite memories - trying desperately to hold on with one hand while scrambling in his pockets for loose change with the other! There were ups and downs then, in his initial encounter with Arabs, but he never forgot how kindly he was treated by that family who took him under their wing on his first day in the Arab World and a quarter of a century later, my father David Bruce now lives in Jeddah, Saudi Arabia to this day. ...read more.