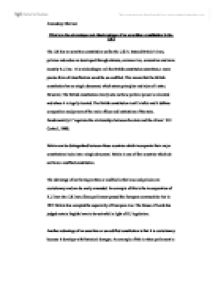 What are the advantages and disadvantages of an unwritten constitution in the UK?