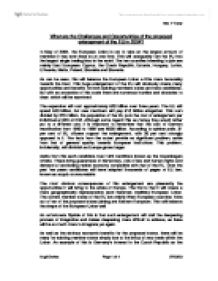 What are the Challenges and Opportunities of the proposed enlargement of the EU in 2004?

What are the Challenges and Opportunities of the proposed enlargement of the EU in 2004? In May of 2004, the European Union is set to take on the largest amount of members it has ever done so at one time. This will unarguably turn the EU into the largest single trading bloc in the world. The ten countries intending to join are mainly East European: Cyprus, the Czech Republic, Estonia, Hungary, Latvia, Lithuania, Malta, Poland, Slovakia and Slovenia. As can be seen, this will balance the European Union a little more favourably towards the East. This huge enlargement of the EU will obviously create many opportunities and benefits for both existing members states and new candidates, but with an accession of this scale there are numerous hurdles and obstacles to clear, which will be examined. The expansion will cost approximately �25 billion over three years. The EU will spend �40 billion, but new members will pay �15 billion altogether. This sum divided by 370 million, the population of the EU puts the cost of enlargement per individual at �66 or �45. Although some regard this as money they would rather put to a different use, it is important to remember that the cost of German reunification from 1990 to 1999 was �600 billion. ...read more.

It is felt by many that the adoption of European law is a loss of sovereignty, but it has been argued by some that sovereignty itself as a concept has much less meaning in today's world, where inter-dependence is far more important than independence and autonomy. This enlargement will create the largest single trading market in the world, which it is believed will in turn boost investment and employment, as well as increasing EU influence on the world stage. Added to this is the historical notion that Europe will finally be fully united after years of war, as well as the ex-soviet Baltic states being able to consolidate the political and economic transition which has gone on for over ten years. As French President Jacques Chirac said in December 2002 at the Copenhagen summit: "One cannot but think this evening of the victims of the numerous wars of the 20th Century, the absurd deaths... the victims of anti-Semitism and r****m, of all the catastrophes... and man's folly."1 Well spoken sentiments, however, have not been enough to curb the challenges and problems this enlargement has faced. The principal problem has been Turkey, which has been postponed from talks for two years, mainly due to concerns over breaches of human rights. As well as this the concerns are cultural and Geographical. ...read more.

The final problem is Cyprus. The island is still not reunified and it is only the Southern Greek Cypriot side which is internationally recognized and could be a part of the European Union. These problems tend to pale in comparison to the advantages and opportunities which will be created for the new EU states themselves. Members will not have to pay tariffs and will have high access to all member states. They will also be protected from outside markets. Eight out of the ten joining in 2004 are emergent democracies. The transition from Communism to Capitalism is always very costly, and with EU membership far more investment will be put into these countries through the two European recovery funds, the ERDF and ESF. Although not a view I take myself, many call this a 'reward' for the 'achievements' of losing communism. One of the most important things these smaller states will gain is a much higher international status. This breeds a stronger political status and more 'clout' at the higher level, for example the EU ambassador to the UN. Whatever your views are on the European Union, if all of these obstacles are cleared, then on May 1st 2004, 10 more countries and approximately 750 million people will join the organization. This will hopefully mend the huge tear in Europe that the Cold War created, and improve the lives of many people. ...read more.