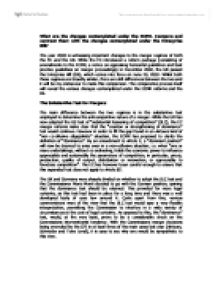 What are the changes contemplated under the ECMR. Compare and contrast them with the changes contemplated under the Enterprise Bill? The year 2003 is witnessing important changes to the merger regimes of both the EC and the UK. While the EC introduced a reform package (consisting of amendments to the ECMR, a notice on appraising horizontal guidelines and best practice guidelines on merger proceedings) in December 2002, the UK passed the Enterprise Bill (EB), which comes into force on June 20, 2003. Whilst both these regimes are broadly similar, there are still differences between the two and it will be my endeavour to make this comparison. The comparative process itself will reveal the various changes contemplated under the ECMR reforms and the EB. The Substantive Test for Mergers: The main difference between the two regimes is in the substantive test employed to determine the anticompetitive nature of a merger. While the UK has now adopted the US test of "substantial lessening of competition" (SLC), the EC merger reforms make clear that the "creation or strengthening of dominance" test would continue. However in order to fill the gap found in an Airtours kind of "non co-ollusive oligopolistic" situation, the ECMR has proposed to clarify the definition of "dominance". By an amendment to Article 2, a "dominant position" will now be deemed to arise even in a non-collusive situation, i.e. when "one or more undertakings, without co-ordinating, holds the economic power to influence appreciably and sustainably the parameters of competition, in particular, prices, production, quality of output, distribution or innovation, or appreciably to foreclose competition". The EC has however been careful enough to ensure that this expanded test does not apply to Article 82. The UK and Germany were sharply divided on whether to adopt the SLC test and the Commissioner Mario Monti decided to go with the German position, opining that the dominance test should be retained. ...read more.

The Enterprise Bill seeks to ensure that in order to be fall within a relevant merger situation for the purpose of the UK regime, the merger has a very close association with the UK. The draft guidance notes in fact explain, that although 25% of the goods/services could be within the UK, one could still argue that the merger hasn't created a relevant merger situation as the entities are not "actively providing such goods/services" but are doing it via their agents and therefore their association with the UK is not strong enough to bring them within this net. The EC's test on "community dimension" is almost a mathematically precise one, guaranteed to ensure that while the transaction is large enough (worldwide turnover of 5 billion), it still has an important EC dimension (turnover of 250 million euros by at least two of the undertakings within the EU). Another important difference at the jurisdictional level is that while the ECMR speaks of a "decisive influence" as constituting the test for determining as to whether one undertaking controls another, the UK uses a more liberal test of "material influence"-a test likely to catch more transactions within its fold. This is best illustrated in the P&O/European Ferries case, where the competition commission concluded that a shareholding of even 16.1% of the voting rights of European Ferries was sufficient to put P&O in a position to have a material influence over policy. The reforms, at both the EC and the UK level reiterate this difference. The "allocation" factor has an important bearing on the jurisdiction issue and needs to be discussed here. The ECMR reforms have important implications for the allocation of cases between the EC and the National Competition Authorities (NCA's). The main concern while devising an allocation mechanism is the ECMR's founding philosophy of acting as a "one-stop shop" mechanism for merger clearances-i.e. ensuring that any merger having a community dimension is dealt with at the EC level and not subjected to the varying decisions of national authorities. ...read more.

This comes at an important time, as the EC faces the prospects of expansion by the addition of 10 new member states. Also, the fact that the number of merger cases before the EC has almost quadrupled in 10 years (from a mere 60 merger cases annually in the 1990's to around to 200-300 today), makes evident the crying need for reforms today. The most significant step in these reforms is the acknowledgement by both the EU and the UK regimes of the importance of the economic underpinnings of competition law. This is perhaps best illustrated by the fact that the ECMR reforms now propose the induction of a chief competition economist, who would oversee the economic analysis underlying merger decisions. The closing of the Airtours gap is a very big step in the EU reform process. However, it is important to realise that notwithstanding the fantastic economic theories that may underlie commission decisions, the commission still needs to do a rigorous factual analysis and fit in these theories within the factual matrix. As the CFI's overruling of the three important merger EC decisions this year would have revealed, the Commission has a long way to go before it achieves this. (See Ridyard and Bishops analysis (Brief 02) of these cases on their website) On the negative side, the extent of judicial review permissible has become contentious after the Tetra Laval decision (the EC in fact plans to appeal the CFI ruling in this regard to the ECJ) and the reforms, both at the EU and the UK level, have done nothing to address this fine issue. The difference in the substantive tests employed by the UK and EU regimes is likely to yield fairly congruent views in practice. Quite apart from this, it is interesting to note that while the EC has provided for more checks and balances, one of which is the introduction of peer review panels, the UK has made a deliberate effort at minimizing the influence of the SOS. ...read more.