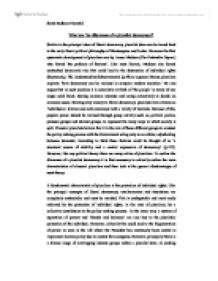 What are the dilemmas of a pluralist democracy?

What are the dilemmas of a pluralist democracy? Similar to the principal ideas of liberal democracy, pluralist ideas can be traced back to the early liberal political philosophy of Montesquieu and Locke. However the first systematic development of pluralism was by James Madison (The Federalist Papers) who feared 'the problem of factions'. Like most liberals, Madison also feared unchecked democratic rule that could lead to the destruction of individual rights (Heywood p. 78). Understood by Schwarzmantel (p.49) as a general theory, pluralism explains 'how democracy can be realised in complex modern societies.' He also argues that in such societies it is unrealistic to think of 'the people' in terms of one single solid block, sharing common interests and acting collectively to decide on common issues. Relating very closely to liberal democracy, pluralists view citizens as 'individuals', diverse and each concerned with a variety of interests. Because of this, popular power should be realised through group activity such as; political parties, pressure groups and interest groups, to represent the many ways in which society is split. Classical pluralists believe that it is the role of these different groups to conduct the policy making process with the Government acting only as an arbiter, adjudicating between demands. ...read more.

Wolff, among others, has insisted that the disparity in power and resources between established and marginal groups is so great in a pluralistic system that there is little genuine possibility for initiating reform from below (Kelso p.3). Finally, a competitive voting system is another key characteristic of pluralism. According to this, the most popular policies, and therefore interest group, will be accounted for by the majority of the population. This will similarly counteract any government from becoming too protected and enshrined within the pluralist state. Looking at pluralism in a wider extent there are three main areas that critics have identified. Firstly many detractors of pluralism such as Hamilton and Wolff claim it is ironic that a doctrine that defines the public in terms of issue publics ignores two main facts: many people do not belong to any groups at all, and marginal groups often have difficulty making themselves heard in the determination of public policy. (Kelso p.90) Similarly, the importance, and therefore continual use, of interest groups may result in high levels of voter fatigue. If citizens do not participate in the group system the theory of pluralism is made completely redundant. ...read more.

This results in weak, unstable governments that spent more time negotiating policy than actually passing it. This would also be common in a pluralist system. Looking, as I have done, at the prospect of elitism, it could be argues that a pluralist system could result in the very thing that it seeks to avoid, totalitarianism and the majority rule of one particular system of government. If a political pressure group, or indeed party, becomes very popular with a large a large following, a majority rule one or two party system (as seen in the US and increasingly in the UK), may become entrenched in the political system due to its own success. This unequal and minority groups stand to suffer. A final point to examine, is the pluralist system of checks and balances. In my opinion, modern politics in the US has now begun to undermine this system particularly in the case of the US Supreme Court, the American President is still able to exert an extraordinary amount of influence on the judge appointment process. This highlights a major weakness in the constitutional system of separation of powers, integral to the pluralist system. As we have seen the main dilemmas of pluralist democracy is the theory itself. In my opinion, it is impractical and has left many 'holes', which those seeking to gain power, can find. ...read more.