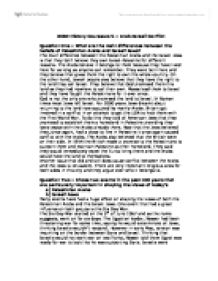 GCSE History Coursework - Arab-Israeli Conflict Question One - What are the main differences between the beliefs of Palestinian Arabs and Israeli Jews? The main difference between the Palestinian Arabs and the Israeli Jews is that they both believe they own Israel-Palestine for different reasons. The Arabs believe it belongs to them because they have lived here for as long as anyone can remember. They were born here and they believe that gives them the right to own the whole country. On the other hand, Jewish people also believe that they have the right to the land they call Israel. They believe that God promised them this land as they had nowhere to call their own. Moses lead them to Israel and they have fought the Palestinians for it ever since. God is not the only one who promised the land to Israel. In Roman times most Jews left Israel. For 2000 years Jews dreamt about returning to the land now occupied by mainly Arabs. Britain got involved in a conflict in an attempt to get the USA to help them with the First World War. To do this they told all American Jews that they promised to establish them a homeland in Palestine providing they keep peace with the Arabs already there. ...read more.

A second example of an event that affected both sides is the Camp David Agreement that took place in 1978. In September a meeting was held at the American President, Jimmy Carter's country house between him, the Egyptian leader Sadat and the Israeli Prime Minister Begin. After 30 years of conflict Egypt said they would agree to peace if Israel gave them the Sinai Peninsula. After 13 days of debate in America they came to an agreement. Israel was flexible about this because it wasn't part of their promised land. As the Israelis had to give up their settlements in the Sinai Peninsula Egypt allowed them to have more settlements in the West Bank. All of this happened simply because, Egypt wanted its land, Israel wanted settlements and both Israel and America wanted peace. This agreement affected the Palestinians in many ways. Egypt had gone behind their back so obviously they felt betrayed and lost their trust in them. They were unwillingly pushed out of some of their land that was negotiated without their consent. Egypt gave this land to Israel which resulted in the Arabs having limited local powers. Yasser Arafat was not impressed and refused to commit to a peace agreement. ...read more.

It was going inside it and meant that the Arabs lost a lot of their given land. Jerusalem is another key issue in this conflict. Both sides believe it belongs to them and it is important because it is a religious side to both Arabs and Israelis. As no one knows what to do about this, it was not covered in the Roadmap or any other peace plans. Also not covered in the Roadmap is the issue of refugees, probably for the same reason. No one knows what to do with them. As well as many Arab refugees in other neighbouring Arab states there are now Israeli refugees moving into West Bank as they have been told, by their own government, to leave the Gaza strip to show they are trying to make peace. However, far from making peace it has created more conflict. The Arabs are yet again angry, although the Israelis have tried to make peace leaving one Arab site they have entered another forcing Palestinians to move once again. Hard as Israel, Palestine, many other neighbouring states and high authority countries have tried peace is still yet to come. A lot of ongoing problems may never be resolved. It seems as though as soon as one issue is put to rest another is uncovered and conflict begins again. ...read more.