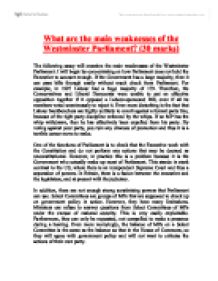 What are the main weaknesses of the Westminster Parliament?

What are the main weaknesses of the Westminster Parliament? (30 marks) The following essay will examine the main weaknesses of the Westminster Parliament. I will begin by concentrating on how Parliament does not hold the Executive to account enough. If the Government has a large majority, then it can pass bills through easily without much check from Parliament. For example, in 1997 Labour had a huge majority of 179. Therefore, the Conservatives and Liberal Democrats were unable to put an effective opposition together if it opposed a Labour-sponsored Bill, even if all its members voted unanimously to reject it. Even more disturbing is the fact that Labour backbenchers are highly unlikely to revolt against a formal party line, because of the tight party discipline enforced by the whips. If an MP has the whip withdrawn, then he has effectively been expelled from his party. By voting against your party, you ruin any chances of promotion and thus it is a terrible career move to make. ...read more.

the House of Commons, so they will agree with government policy and will not want to criticise the actions of their own party. Labour MP Tony Wright argues that the main weakness of Westminster Parliament is the fact that its function of scrutiny hardly even exists. He notes that a Labour MP recently remarked to him that it was nobody's job to scrutinise government legislation, and in fact Parliament does not really exist collectively at all. What in fact exists is just government and opposition - engaged in never-ending election campaign. In addition, there is not a very tight control on the behaviour of MPs, regarding sleaze, scandal and corruption regarding money and where MPs get their funding from. The Nolan Report of 1995 exposed this growing scandal, and recommended a tighter control on where MPs receive their money from. Whilst many of its suggestions have been dismissed by Parliament and subsequently ignored, to its credit several improvements to the system have been made that means there are tighter regulations on MPs regarding their ulterior motives and potentially conflicting interests on receiving payments from various donors. ...read more.

For example, the Scottish Parliament now has legislative and tax-varying powers. However, even bigger a limitation of Parliament is that its sovereignty is now even more undermined by the EU. This is because EU law always takes precedence over UK law. For example, the Merchant Shipping Act of 1988 had to be repealed because the House of Lords decreed in the 1991 Factortame Case that part of the UK law infringed EU law. Finally, a weakness of Westminster Parliament is that the Upper House is completely undemocratic, since nobody elects members of the House of Lords, and therefore it is essentially unrepresentative of the people it claims to serve. Its only real power is the ability to delay bills. Whilst it can suggest amendments, after the third re-sending it cannot do anything further. Thus, it cannot stand up to what the House of Commons wants to do. Therefore, its function of scrutiny becomes meaningless. Additionally, even if it could effectively oppose the House of Commons, the question must be begged: what legitimacy does an unelected body of people have in a developed liberal democracy such as Britain? ...read more.