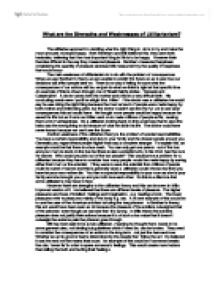 What are the Strengths and Weaknesses of Utilitarianism?

What are the Strengths and Weaknesses of Utilitarianism? The utilitarian approach to deciding what the right thing to do is to try and make the most amounts of people happy. Both Bentham and Mill believed this, they were both hedonists, believing that the most important thing in life is to be happy. However their theories differed in the way they measured pleasure. Bentham measured happiness considering the quantity of pleasure whereas Mill measured it by the quality of happiness that would occur. The main weakness of utilitarianism is to do with the problem of consequences. When we use Bentham's theory we are unable to predict the future so as to see how our decisions will affect people later on. There is no way of telling for sure what the consequences of our actions will be, we just do what we think is right at that specific time. ...read more.

Another weakness of the utilitarian theory is the problem of special responsibilities. You have a certain responsibility and duty to your family and the closest people around you. Generally you regard these people higher than say a complete stranger. To explain this, an example could be that there is a bus crash. You can only get one person out of the bus and your mum is stuck on the bus but there is also a scientist who, in his mind, has the cure for cancer. Who would you pick out of the two people? This would prove a problem for a utilitarian because they have to consider how many people would be made happy by saving either their mum or the scientist. If they were to save the scientist then millions of people could be cured of cancer and this is generally what a utilitarian would choose but then you have let your own mother die. ...read more.

Mill has been said to be a rule-utilitarian, meaning he thought there needs to be some general rules, not binding but guidelines which if need be, can be broken. They need to consider the consequences of an action in the long term, not just the here and now. Whether an act is good or bad is determined by the results that follow the act. He believed it was the end not the means that count. An example of this could be if someone breaks the rule, 'never lie' in order to spare someone's feelings. This would create more hedons than telling the truth and hurting their feelings. The final strength of utilitarianism is that if everyone in the world applied this principle to their entire decision making, then the whole world would be as happy as it could possibly be. If everyone obeyed the rule 'don't murder' no one would be murdered and that would make the most amount of people happy. ...read more.