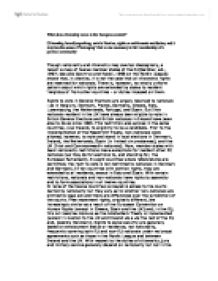 What does citizenship mean in the European context?

What does citizenship mean in the European context? Citizenship, broadly speaking, entails liberties, rights or entitlements and duties; and it involves the sense of 'belonging' that is also necessary to full membership of a political community Though nationality and citzenship may overlap ideologically, a recent survey of twelve member states of the EU(Gardner, ed., 1997; see also Qvortrup and Hazell, 1998 on the Nordic League) shows that, in practice, it is not the case that all citizenship rights are reserved for nationals. There is, however, no wholly uniform pattern about which rights are extended by states to resident 'neighbours' from other countries - or duties imposed on them. Rights to vote in General Elections are largely reserved to nationals - as in Belgium, Denmark, France, Germany, Greece, Italy, Luxembourg, the Netherlands, Portugal, and Spain. But Irish nationals resident in the UK have always been eligible to vote in British General Elections and British nationals in Ireland have been able to do so since 1985. This restriction also applies in the same countries, plus Ireland, to eligibility to be a candidate. Prior to the implementation of the Maastricht Treaty, non-nationals were allowed, however, to vote and stand in local elections in Denmark, Ireland, the Netherlands, Spain [in limited circumstances], and the UK [Irish and Commonwealth nationals]. Now, member states with basic nationality restrictions make exceptions for resident other EC nationals (as they do for elections to, and standing for, the European Parliament). In eight countries where referendums are permitted, the right to vote is not restricted to nationals in Denmark and Germany. In ten countries with petition rights, they are extended to all residents, except in Italy and Spain. With certain restrictions, nationals and non-nationals have rights to assembly and to form associations in all twelve countries. In none of the twelve countries surveyed is access to the courts barred by nationality but they vary as to whether non-nationals are entitled to legal aid and there are differences over the jurisdiction of the courts. ...read more.

(1) Citizenship of the Union is hereby established. Every person holding the nationality of a Member State shall be a citizen of the Union. Although the Citizenship Chapter and its Article 8 are part of the Community Pillar, the citizenship established is, supposedly, Union citizenship. It would be strange if Community nationals would be citizens of the Community but not of the Union. After all, it was the move from Community to Union which was to mark the TEU. But the prevailing view among Member States at least, is that the Union, as such, has no legal personality. How can one be a citizen of an entity which has no legal personality? This might be seem a quibble with no consequences. Consider, however, the following. Article 8 continues: 2. Citizens of the Union shall enjoy the rights conferred by this Treaty and shall be subject to the duties imposed thereby. In a system based on the Rule of Law rights and duties are, for the most part, backed by judicial enforcement. The High Contracting Parties of the TEU, however, excluded as far as they could the jurisdiction of the Court from the Pillars 2 and, significantly, Pillar 3. On one view this means that no rights and duties are imposed on individuals outside the Community Pillar or, that whatever rights and duties were created, would not, in the intention of the States, be enforceable. The impression of at least a measure of cynicism in this respect is suggested by the following. Article 8d provides a couple of the rights to be enjoyed by Union citizens. Every citizen of the Union shall have the right to petition the European Parliament in accordance with Article 138d. Every citizen of the Union may apply to the Ombudsman established in accordance with Article 138e. We already noted that the right of petition pre-dated the TEU. So it was just a matter of reassigning a name. ...read more.

The Treaties on this reading would have to be seen not only as an agreement among states (a Union of States) but as a "social contract" among the nationals of those states -- ratified in accordance with the constitutional requirements in all Member States -- that they will in the areas covered by the Treaty regard themselves as associating as citizens in this civic society. We can go even further. In this polity, and to this demos, one cardinal value is precisely that there will not be a drive towards, or an acceptance of, an over-arching organic-cultural national identity displacing those of the Member States. Nationals of the Member States are European Citizens, not the other way around. Europe is "not yet" a demos in the organic national-cultural sense and should never become one. One should not get carried away with this construct. Note first that the Maastricht formula does not imply a full decoupling: Member States are free to define their own conditions of membership and these may continue to be defined in national terms. But that, in my view, is the greatest promise of introducing supranational citizenship into a construct the major components of which continue to be States and nations. The National and the Supranational encapsulate on this reading two of the most elemental, alluring and frightening social and psychological poles of our cultural heritage. The national is Eros: Reaching back to the pre-modern, appealing to the heart with a grasp on our emotions, and evocative of the romantic vision of creative social organization. But we know that darkness lurks too. The Supranational is Civilization: Confidently modernist, appealing to the rational within us and to Enlightenment neo-classical humanism. Here, too, we are aware of the frozen and freezing aspect this humanism might take. Martin Heidegger is an unwitting ironic metaphor for the difficulty of negotiating between these poles earlier in this Century. His rational, impersonal critique of totalistic rationality and of modernity remain a powerful lesson to this day; but equally powerful is the lesson from his fall: An irrational, personal embracing of an irrational, romantic pre-modern nationalism run amok. ...read more.