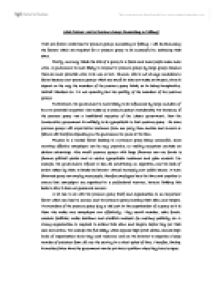 What Factors Lead to Pressure Groups Succeeding or Failing?

The members of the pressure group play a vial part in the organisation of a group as it is them who make sure campaigns run effectively. They recruit member, raise funds, research facilities, make decisions and establish methods for creating publicity etc. A strong organisation is required to achieve their aims and targets, before they put their case into action. For example the fuel lobby, which opposed high petrol duties, showed high levels of organisation since they used resources such as the internet to organise a large number of protesters from all over the country in a short period of time. Therefore, timing is another factor since the government can be put into a position where they have to agree. Pressure groups need to let the public know what they are campaigning or fighting for so here the media can influence the public and decision makers. Media attention makes it less easy for the prime minister or government to ignore. Many issues such as smoking and animal cruelty have been able to attract support through TV, radio and leaflets etc. ...read more.

This combination has resulted in important policy changes and developments, over past years such as equal pay for women, experimentation on animals, reducing the age of consent for homosexuals to eighteen and relaxation of the alcohol licensing laws. The Snowdrop Appeal founded after the Dunblane Primary School massacre was successful in a way. Although the group appealing wanted handguns to be banned completely, public sympathy due to the large numbers of people involved, forced the government to tighten rules on gun ownership. At times, pressure groups face oppositions not only with the government, but at times they are ranged against other pressure groups. In these cases, the government simply acts as arbiter between competing claims. Examples include the anti-smoking lobby vs. the tobacco industry, transport 2000 vs. the motorcar industry and the animals rights campaigners vs. the fur trade. The successful pressure groups are those who are imaginative and tactical in their campaign, so the effectiveness of action will most probably determine success. Overall all of these factors contribute to the success of pressure groups and it is when they have fulfilled their aims and gain public support and attention that they have truly succeeded. ...read more.