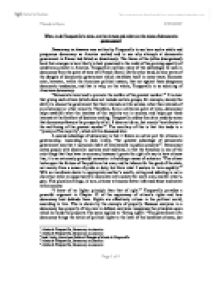 What, in de Tocqueville's view, are the virtues and what are the vices of democratic government?

What, in de Tocqueville's view, are the virtues and what are the vices of democratic government? Democracy in America was written by Tocqueville to see how such a stable and prosperous democracy as America worked and to see why attempts at democratic government in France had failed so disastrously. The theme of the (often disorganised) book that emerges is how liberty is best preserved in the midst of the growing equality of conditions present in America. Tocqueville outlines many of the advantages he sees in democracy from the point of view of a French liberal. On the other hand, he also warns of the dangers of democratic government which manifests itself in many ways. Elements exist, however, within the American political system, that act against these dangerous democratic tendencies, and that is why, on the whole, Tocqueville is so admiring of American democracy. "Democratic laws tend to promote the welfare of the greatest number."1 It is clear that giving each citizen (which does not include certain groups, for example, slaves) the ability to choose the government that their interests will be served, rather than interests of an aristocracy or other minority. Therefore, from a utilitarian point of view, democracy helps establish what the interests of the majority are in society, and helps put those interests at the forefront of decision-making. Tocqueville refutes the claim made by some that democracy favours the prosperity of all. It does not do so, but merely "contributes to the well-being of the greatest number"2. ...read more.

The moral force that the opinion of the majority has on society is extremely powerful. As all are equal, no one opinion is greater than another; the opinion held by the majority must be the best one and this leads to a tendency to a abandon freedom of thought in democratic societies. Indeed, to go against it is contradictory to the principle of equality. In Tocqueville's view, this form of tyranny can be seen as even worse than past tyrannies: "Formerly tyranny used the clumsy weapons of chains and hangmen; nowadays even despotism, though it seemed to have nothing to learn, has been perfected by civilisation."9 There are two further intangible dangers of democracy. Firstly, democracy encourages individualism: "Individualism is of democratic origin, and threatens to grow as conditions get more equal."10 Equality tends to make people's interests focus in on themselves. Without the societal bonds/duties present as in aristocracy, people do not realise their dependence on each other. Secondly, democracy encourages materialism. The passion for equality results in citizens thinking that they ought to be able to have as much wealth as everyone else. Indirectly, materialism also comes from the philosophical tendency fostered by democracies to disdain lofty ideas or thoughts of eternity. Therefore, people may neglect to use their political freedom which may lead to people willingly abandoning freedom for benevolent despotism on the promise that this better provides and ensures an orderly society with material prosperity. ...read more.