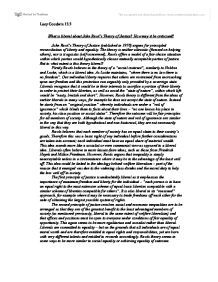 What is liberal about John Rawls Theory of Justice? How may it be criticised?

What is liberal about John Rawl's Theory of Justice? How may it be criticised? John Rawl's Theory of Justice (published in 1970) argues for principled reconciliation of liberty and equality. The theory is neither altruistic (focused on helping others), nor is it egoistic (self-concerned), Rawls offers a model of a fair choice situation within which parties would hypothetically choose mutually acceptable parties of justice. But to what extent is this theory liberal? Firstly Rawls believes in the theory of a "social contract", similarly to Hobbes and Locke, which is a liberal idea. As Locke maintains, "where there is no law there is no freedom". Our individual liberty requires that others are restrained from encroaching upon our freedom and this protection can arguably only provided by a sovereign state. Liberals recognise that it would be in their interests to sacrifice a portion of their liberty in order to protect their liberties, as well as avoid the "state of nature", within which life would be "nasty, brutish and short". ...read more.

It is also liberal in its "reasoned" approach, for example where it may be necessary to trade freedoms off each other for the sake of obtaining the largest possible system of rights. The second principle of justice involves social and economic inequalities are to be arranged so that they are of the greatest benefit to the least advantaged members of society (as mentioned previously, liberal to the same extent of welfare liberalism) and that offices and positions must be open to everyone under conditions of fair equality of opportunity. This again seems to be more egalitarian and socialist rather than liberal. Liberals are committed to equality - but on the grounds that all individuals are of equal moral worth and are therefore entitled to equal rights and responsibilities, yet are born with very different talents and entitled to rewards accordingly. Rawls theory seems in some ways to be more similar to social equality or achieving equality of outcome. Rawls theory of justice demonstrates that he holds a social liberal position, which is that he values equality but also emphasises common freedoms. ...read more.

Therefore they should be more community based and a universal system of justice would simply not be compatible with this. Michael Sandel wrote "Liberalism and Limits of Justice" and within it criticises how Rawls asks us to think about justice whilst divorcing us from the very values and aspirations that define u as well as that the original position is abstract and implausible. He primarily seeks to use liberal moral ideals to build a new "public philosophy" in America. Walzer believes that Rawls's Theory of Justice fails to incorporate any morals or values, and instead focuses too much of the bargaining of goods. From the left wing, Robert Paul Wolff argues that Rawls theory constructs justice from existing practice and does not take into account that there may already be existing problems of injustice embedded into the ideas of capitalism, private property and the market economy. A final criticism is put forward by Susna Moller Okinb who maintained that Rawls theory could justify injustices and hierarchies embedded within the family network. She also criticises Rawls for not taking patriarchal social relations and gendered division of labour into account. ?? ?? ?? ?? Lucy Goodwin 13.3 ...read more.