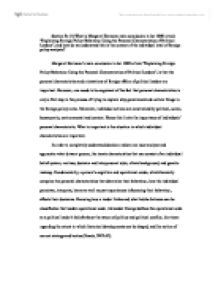 What is Margaret Hermann main conclusion in her 1980 article &quot;Explaining Foreign Policy Behaviour Using the Personal Characteristics of Political Leaders&quot;, and how do we understand this in the context of the individual level of foreign policy analysis?

low in nationalism and likely to exhibit little belief in their own ability to control the events in which they are involved (Hermann: 8). Another type of personal characteristic is that of interpersonal style, which is the characteristic way in which a policy maker deals with other policy makers. There are two interpersonal style characteristics according to Hermann, they are: 1) Paranoia - excess suspiciousness, and 2) Machiavellianism - unscrupulous, manipulative behaviour. These traits can be found in a type of political leader with a warfare personality such as Stalin and Hitler. Individual traits do influence foreign policy. There are cases where a countries foreign policy has taken a drastic change as leadership changes through death or elections. This was seen in the abandonment of President Jimmy Carter's human rights focus in favour of a hawkish, cold war policy orientation of President Ronald Reagan when he succeeded Carter. It is clearly evident that the US foreign policy changed with a change in leadership. ...read more.

One must be cognizant of the fact that major events in international history were brought about by individual actors. Notably, the Cold War ended because of the actions of Grobechav. The assassination of the Arch Duke Ferdinand was key in the immediate cause of World War I. More recently, if it were another president in office other than George Bush one doubts there would be a war with Iraq now. The actions of Egyptian President Anwar Sadat in the 1970s flowed directly from his primary beliefs. His operational code and cognitive map of "Egypt First" illustrated the direction of course he set for Egypt (Neack, 2003: 64-65). The personal characteristics and orientations of foreign affairs of political leaders are important. Nonetheless, one needs to be cognizant of the fact that personal characteristics is only a first step in the process of trying to explain why governments do certain things in the foreign policy arena. ...read more.