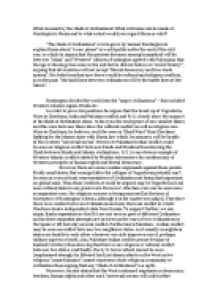 What is meant by the Clash of Civilisations? What criticisms can be made of Huntingtons thesis and to what extent would you regard them as valid?

﻿What is meant by the Clash of Civilisations? What criticisms can be made of Huntington?s thesis and to what extent would you regard them as valid? ?The Clash of Civilisations? a term given by Samuel Huntington to explain thesis about ?a new phase? in world politics after the end of the cold war, in which he argues that the greatest divisions among humankind will be between ?Islam? and ?Western? cultures. Huntington agreed with Fukuyama that the age of ideology has come to the end but he did not believe in ?end of history?, arguing that all countries will not accept ?liberal democracy and free-trade system?. His belief was that now there would be cultural and religious conflicts, as in the past: ?the fault lines between civilizations will be the battle lines of the future?. Huntington divided the world into the ?major civilizations? ? this included Western; Islamic; Japan; Hindu etc. In order to prove his positions he argues that the break up of Yugoslavia; Wars in Chechnya; India and Pakistan conflict and 9/11 clearly show the support of his Clash of Civilization ideas. In his eyes, the emergence of new smaller states and the wars between them show the cultural conflict as well as religious one. Wars in Chechnya, he believes, could be seen as ?Jihad Wars? thus Chechens fighting for the Islamic state with Sharia law which, he assumes, will be hostile to the western ?universal norms?. ...read more.

Also, he emphasised the ?Islamic Revolution? which took pace from the 1960 into 1970s many young Arabic intellectuals became disgusted by the way their rules were totally embracing the western way of life such as massive consumer spending and totally ignoring the conditions of their poor subjects. As a result radicals saw their Sheikhs [originally religious leaders but in this context just a leader] as debasing Islam. This eventually resulted in the Iranian revolution of 1979 in which the Shah of Iran was forcebly deposed. Controversially he [Samuel Huntington] argues that ?Islam has bloody borders? ? he was referring to the massive population explosion in the Middle East and Islamic proximity to many civilisations including Orthodox and Western, e.g. Chechnya. He also identifies common Chinese and Islamic interests in the areas of weapons proliferation, human rights and democracy and he feels that this areas in which these two civilisations will cooperate e.g. the very close trade links in nuclear technology between China and Iran which is led to demands in the West, especially by Tony Blair, that the West ?must deal with? that rogue state ? Iran. He believes that Civilisations conflicts are ?particularly relevant between Muslims and non-Muslims?. He highlights that Western universalism i.e. the view that all civilisations should adopt Western values is the key issue that infuriates Islamic Fundamentalists. However there are some criticisms of Huntington?s thesis given by different scholars. ...read more.

For example, in recent Tunisian and Egypt protests we could see a very strong anti-American mood and it is one of the reasons of protests as citizens are not satisfied of their countries being puppet state of USA. The ?Clash? emerged after 9/11 as US intervention into Middle East and media outcry began. The constant accusation from both sides led to hostility between the ?Muslim? and ?Western? countries. The recent wars in Middle East and terror acts in the West shows the matter. Of course there is some truth in Said?s and other scholar?s arguments but it is simply just a theory and idealistic views. Many (not all of course) Westerns openly hate Islam and condemn all Islamic values mainly due to negative media look on Islam and constant terror acts on Western territories. Many Muslims also condemn Western values due to their religious views. Also hostility is raised by the wars in Middle East, support of Israel and criticisms made of Islam even by high profile politicians. Bush?s remark of ?Islamic fascism? made millions of Muslims extremely anti-American and worsened the situation badly. The recent caricature scandal where Dutch artist draw the Muslim Prophet made many millions angry again. Summing up all of the above it could be said that although in theory the criticisms given by scholars are stronger than Huntington?s points, in real world Huntington?s theory does fit. Therefore the argument of ?Clash of Civilizations? is valid and real nowadays. ...read more.