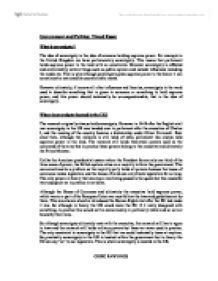 So although in theory the UK could leave the EU if it really disagreed with something, in practice this would not be economically or politically viable and so we are bound by their laws. So although sovereignty ultimately rests with the executive, the monarch still has to agree to laws and the monarch still holds military powers but these are never used in practice. The only constraint to sovereignty is the EU that we could technically leave at anytime. So practically sovereignty in the UK is located within the government but in theory the EU can say 'no' to our legislation. This is where sovereignty is located in the UK. Why has the UK's un-codified constitution been criticised? Over the years the UK's un-written or un-codified constitution has been criticised. This criticism has not only come from countries with a codified constitution but also within the UK as well. Although the UK constitution is un-codified it has however been around longer than any constitution in the entire world. ...read more.

The advantage of having an un-codified constitution is that in an emergency and act or law can be added pr removed completely within twenty-four hours as no government can bind another government. So basically there are both advantages and disadvantages of both systems. With an un-codified constitution not everything is set in stone so things can be adjusted from case to case and also it is very quick and easy to change. The disadvantage to this is that this gives a lot of power to the executive and in theory they could run a dictatorship with no one to stop them. This is an advantage of a codified constitution because it is not very easily change and so does not give a lot of power to a few people. The disadvantage of this system is that things take a long time to change and can never be completely removed. Despite both the advantages and disadvantages of both of the systems, each system works best for the country that uses it. So all the UK's constitution has been criticised it obviously works because it has lasted for such a long period of time. GREIG RAWLINGS ...read more.