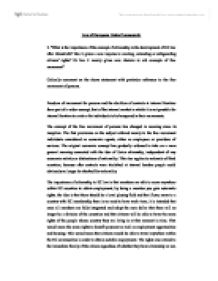 &quot;What is the importance of the concept of citizenship in the development of EC law after Maastricht? Has it given a new impulse to creating, extending or safeguarding citizens' rights? Or has it merely given new rhetoric to old concepts of free movement&quot;.

Law of European Union Coursework 2. "What is the importance of the concept of citizenship in the development of EC law after Maastricht? Has it given a new impulse to creating, extending or safeguarding citizens' rights? Or has it merely given new rhetoric to old concepts of free movement" Critically comment on the above statement with particular reference to the free movement of persons. Freedom of movement for persons and the abolition of controls at internal frontiers form part of a wider concept, that of the internal market in which it is not possible for internal frontiers to exist or for individuals to be hampered in their movements. The concept of the free movement of persons has changed in meaning since its inception. The first provisions on the subject referred merely to the free movement individuals considered as economic agents, either as employees or providers of services. The original economic concept has gradually widened to take on a more general meaning connected with the idea of Union citizenship, independent of any economic activity or distinctions of nationality. This also applies to nationals of third countries, because after controls were abolished at internal borders people could obviously no longer be checked for nationality. The importance of citizenship in EC law is that members are able to move anywhere within EC countries to obtain employment, by being a member you gain automatic rights. ...read more.

He was prosecuted and ordered either to pay a small fine or go to prison for one day. He appealed and a reference was made to the Court of Justice. The Court held that because Art 7a (now 14) provides only that the Council may adopt provisions to facilitate the objectives of internal marker, the provisions are not directly effective. The Court observed that at the time of the events in question, there were no common rules on immigration or border controls, therefore even if an unconditional right to move was established, the Members States still retain the right to carry out identity checks and to determine whether the person entering the State is a person entitled to do so. Furthermore, Member States have the right to impose penalties for breach of the obligation to be identified, provided that such penalties are proportionate and comparable to penalties for similar national infringements. The Court considered that imprisonment would create an obstacle to free movement of persons but that the fine of NLG 65 appeared to be acceptable. It remains to be seen how this will affect the rights of entry and residence of those seeking work or establishment. Furthermore a new Title on Visas, Asylum, Immigration and other policies relating to Free Movement of Persons has been incorporated into the Treaty (Arts 61-69). ...read more.

Ms Van Duyn claimed that the refusal was not made on the ground of her personal conduct but on the conduct of the group. The Court of justice held that personal conduct must be an act or omission to act on the part of the person concerned and must be voluntary. It need not, however, be illegal or criminal in order to offend public policy. The court further held that present association, reflecting participation in the activities and identification with the aims of a group, may be considered a voluntary act and could therefore come within the definition of conduct. it follows from the case law of the Court that Member States have not relinquished all control over Community nationals as regulations governing the registration of aliens and criminal sanctions in this respect are compatible with their Treaty obligations unless they are so rigorous as to be tantamount to a rejection of the freedom of movement over and above the cases covered by the derogation provisions. Public Policy provides a Member Sate with discretion but only within the limits allowed for by the Treaty, which are narrowly interpreted by the ECJ. Criminal conviction does not automatically justify deportation (Bonsignore v Stadt Koln). In R v Bouchereau4 a conviction for drug offences was regarded as a sufficient ground for deportation. 1 [1991] E.C.R. I-745 2 [1977] E.C.R. 1355 3 [1975] Ch. 358 4 [1978] Q.B. 732 ...read more.