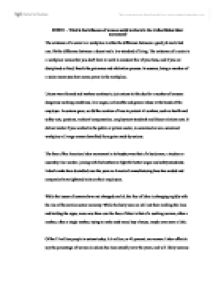 What is the influence of women social workers in the United States labor movement?

4129511 - What is the influence of women social workers in the United States labor movement? The existence of a union in a workplace is often the difference between a good job and a bad one. It's the difference between a decent and a low standard of living. The existence of a union in a workplace means that you don't have to work in constant fear of your boss, and if you are disciplined or fired, there's the grievance and arbitration process. In essence, being a member of a union means you have some power in the workplace. Unions were formed and workers continue to join unions to this day for a number of reasons: dangerous working conditions, low wages, no benefits and general abuse at the hands of the employer. As unions grew, so did the creation of laws to protect all workers, such as health and safety acts, pensions, workers' compensation, employment standards and labour relations acts. It did not matter if you worked in the public or private sector, in unionized or non-unionized workplace-all wage earners benefited from gains made by unions. The face of the American labor movement in its heyday was that of a burly man, a trucker or assembly-line worker, joining with his brothers to fight for better wages and safety standards. Labor's ranks have dwindled over the years as America's manufacturing base has eroded and companies have tightened reins on their employees. While the issues of concern have not changed one bit, the face of labor is changing rapidly with the rise of the service sector economy. While the burly men are still out there walking the lines and holding the signs, more now than ever the face of labor is that of a working woman, often a mother, often a single mother, trying to make ends meet, buy a house, maybe even save a little. ...read more.

Who Benefits From Unions? Before accounting for the decline in union enrollment, it suffices to consider who is impacted by today's unions? Literature is consistent in that members of strong unions tend to make more money and receive better benefits than non-union workers in the same jobs. While unions generally protect all of its members, certain socioeconomic groups reap even greater benefits than others. In Ohio for example, workers in lower-paying jobs, minorities, and women that are enrolled in unions receive pay that more significantly closes the gaps in compensation between: the non-educated and educated; women and men; and African Americans and Caucasians than do their nonunion equivalents. Median earnings of non-union Ohioans without and with high school diplomas in 1997 were $6.50 per hour and $8.75 per hour, respectively. A union member without a diploma, however, received $11.20 per hour. Again, these data are similar for non-union and union women as compared to men, and non-union. Where union males made $2.50 per hour (median) more than non-union males in same jobs, union women made $3.50 per hour more than non-union females, and so on for African Americans versus Caucasians. Furthermore, union membership compliments higher wages for these affected classes with increased job security and with more equal and fair treatment than those not in unions. However, in an effort to improve women's relative earnings and labor market status, US government has adopted policies that promote equal treatment in the workplace. The two most common types of such policies are equal-pay and equal-opportunity measures. These measures do not target women for protection or special treatment, but they do have the explicit goal of improving women's labor market outcomes by eliminating wage and employment discrimination against women. The "equal pay for equal work" clause requires employers to The equal-pay clause can change the impact that other protective measures for female workers have on the labor market. ...read more.

After all, we are talking about a substantially larger and more influential organizational body than many others that have found their way into the history books. For those who refuse to accept anything less than a complete historical perspective on America, the basic premise must be that such a perspective also include the story of women who sought to advance the cause of the political arm of the labor movement. They were the women who actually propagated the same ideas that have played such an important role in transforming twentieth-century American society-ideas of demonstrably progressive potential for social development. Whatever one's personal opinion of the radical movements and their activities among women in the United States, it is wrong to cover up their presence and their history. The contributions of labor organizations to the history of women in American society claim equal interest with the contributions of other organizations, and there can be no doubt that their membership rosters included just as many hard-working, law-abiding citizens as the rosters of any other comparable body. The women labor movement was inspired by a pure strain of altruism: it worked for the welfare of all, not simply the individual. It stands to reason that this objective carries far more weight in comparison with the outlook of people whose sole objective in life is the pursuit of material gain. Finally, I believe that the American women's labor movement toward liberation is becoming more spontaneous and individual and less organized and collective: the various women's organizations, women's groups and political parties, that we had believed to be the main pillars of the movement, tend to diffuse the movement. The main battle must be carried out to the individual woman: in the kitchen, the bedroom, the classroom, the workplace, the voting booth and whenever the two sexes meet. The road is long but the dream is gradually becomes a reality. ...read more.