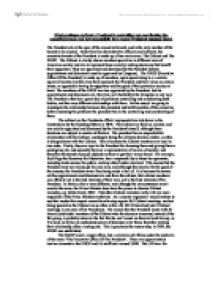 What problems confront a President in controlling and coordinating the executive branch and how successfully have recent Presidents assessed them?

What problems confront a President in controlling and coordinating the executive branch and how successfully have recent Presidents assessed them? The President sits at the apex of the executive branch, and is the only member of the branch to be elected. Aside from his administrative officials and advisors, the executive branch of the President is made up of two main areas. The Cabinet and The EXOP. The Cabinet is a body whose members specialise in different areas of American society and aim to represent those areas by making decisions that benefit their supporters. They are appointed and dismissed by the President (whose appointments and dismissals must be approved by Congress). The EXOP (Executive Office Of the President) is made up of members, again specialising in a a certain aspect of society, but this time they represent the President and their views on certain issues, as opposed to having its supporters and the good of that particular society at heart. The members of the EXOP are also appointed by the President, but his appointments and dismissals are, this time, not checked by the Congress in any way. The President often has a great deal of problems controlling and coordinating both bodies, and has very different relationships with them. ...read more.

These include the White House Office, the OMB (Office of Management and budget), the National Security Council and the Council of Economic Advisors. The members of the EXOP, again, are un-elected and are appointed and dismissed by the President, however, with no senate ratification involved, the president is free to throw out any 'non complying members', and this means that the EXOP are never keen to tell the President anything he doesn't want to hear. The EXOP is often used as an alternative to the cabinet, and, seeing as the members of the EXOP are much more likely to approve of the presidents ideas and inflate his ego (because their jobs depend on it), it's no surprise that they are a popular alternative. The main responsibility for coordination of the executive branch lies with the chief executive, the president. Although there are many sources of help to do this, it is still no easy task. As German sociologist Max Weber pointed out in the early 1900's, the bureaucracy is a powerful force in modern politics. The difficulty of coordinating the executive branch is such because of a number of a factors. Size, advice and implementation, divisions and conflict, the EXOP itself, political appointees, outside links and congressional oversight. ...read more.

Links with the private sector are also important, not only for future opportunities, but also for the day-to-day brawls of bureaucratic politics. The most widely publisised relationship is between then department of defense and the defence industries. In Britain, civil servants make links with department, between departments and with pressure groups. All of these links can make government more efficient by increasing communication within the administration. The closeness of some relationships is apparent, and the fact that they are used for personal gain is evident too, as a congressional enquiry of the late 1960's found that the 100 largest defence contractors employed 1400 ex-military personnel as executives. In 1983 13,682 Pentagon (department of defence) employees left to get jobs in the defence industries. The flow still continues today. The presidents ability to coordinate the bureaucracy is made no easier by the fact that this responsibility, as are most others, is covered by the seperation of powers. Congress has a significant voice in controlling the administration eg: the Presidents appointments and dismissals for the bureaucracy must have senate ratification - except those in the EXOP. Summing up, the president has many problems in the controlling of the executive branch, but it does assist him greatly in the running of the country. He is able to choose which area of the branch he is to work with on certain issues, and has a vast amount of expertees and resources at his disposal. ...read more.