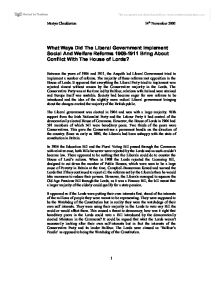 What Ways Did The Liberal Government Implement Social And Welfare Reforms 1906-1911 Bring About Conflict With The House of Lords?

What Ways Did The Liberal Government Implement Social And Welfare Reforms 1906-1911 Bring About Conflict With The House of Lords? Between the years of 1906 and 1911, the Asquith led Liberal Government tried to implement a number of reforms. The majority of these reforms met opposition in the House of Lords. It appeared that everything the Liberal Party tried to implement was rejected almost without reason by the Conservative majority in the Lords. The Conservative Party was at the time led by Balfour, relations with Ireland were strained and Europe itself was unstable. Society had become eager for new reforms to be introduced and the idea of the slightly more radical Liberal government bringing about the changes excited the majority of the British public. The Liberal government was elected in 1906 and won with a large majority. With support from the Irish Nationalist Party and the Labour Party it had control of the democratically elected House of Commons. However, the House of Lords in 1906 had 591 members of which 561 were hereditary peers. Two thirds of the peers were Conservatives. This gave the Conservatives a permanent handle on the direction of the country. Since as early as 1890, the Liberals had been unhappy with the state of constitution in Britain. In 1906 the Education Bill and the Plural Voting Bill passed through the Commons with relative ease, both Bills however were rejected by the Lords and as such couldn't become law. ...read more.

Democracy didn't truly reign until the Lords powers were greatly reduced in 1911. Perhaps it is true that the clever leadership of Asquith backed up by Lloyd George did deliberately set out to bring about the crisis safe in the knowledge that with the Labour party and Irish Nationalist party backing they would almost certainly win any election and would in the end reach their goal of dissolving the powers the powers of the House of Lords. Maybe Balfour and Lord Lansdowne thought that by forcing General Election after General Election and Constitutional Crisis they might have been able to sneak a victory and regain the leadership of the country, this would have put an end to the crisis and the Lords powers would have been intact. Either way the passing of the Parliament Bill ended the serious conflict between the Lords and the Commons as the Lords could no longer reject out right a Bill, they could merely delay it. Why Did The Attempt To Reform The Constitution In 1910-11 Succeed? In 1911 the Liberal Government passed the Parliament Bill through both the Commons and the House of Lords. The bill reduced the powers of the Lords to such an extent that they could only reject a bill twice before it automatically became law. This was a huge progression in how Britain was governed. More than ever the country was democratic and the reforms of the democratically appointed ministers could only be delayed. ...read more.

was raised. The whole constitution had become stale and was in need of change, there should have no way that the Lords could veto the Budget, if all the Lords were democratically selected then maybe, but the fact that at the time about 550 of the Lords were hereditary meant they should have very little power, if any. It could be this reason that first Edward VII and George V threatened to introduce new liberal peers. There was no other way for the Liberals to make the system more democratic and fair. From the events highlighted above, the main reason behind the attempt to reform the constitution succeeding in 1910-11 was the involvement and intervention of the monarchy. Had the monarchy not interfered in the debate then the constitutional crisis may have continued for a substantial period of time. The monarchy like stated earlier, put the Lords and the Conservatives as a whole into a corner. They had very little choice in the end but to pass the Parliament Bill. The Liberals did very well in getting the monarchy involved and perhaps for deliberately antagonising the Conservatives with bills they knew the Lords would reject, finally culminating in the 1909 Budget. Whether or not it was all a plan or conspiracy it will never be known, but the passing of the Parliament Act left the Conservative party both defeated and divided, in the words of Ewen Green 'Having entered the fray in 1909 with enthusiasm and high hopes, the Conservative party emerged defeated and in disarray,' ?? ?? ?? ?? Martyn Chadderton 14th November 2000 1 ...read more.