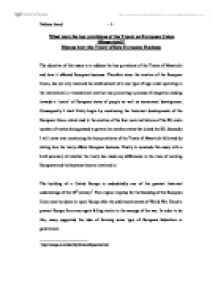 What were the key provisions of the Treaty on European Union (Maastricht)? Discuss how this Treaty affects European Business.

What were the key provisions of the Treaty on European Union (Maastricht)? Discuss how this Treaty affects European Business The objective of this essay is to address the key provisions of the Treaty of Maastricht and how it affected European business. Therefore since the creation of the European Union, has not only involved the establishment of a new type of legal order operating in the international or transnational area but also promoting a process of integration leading towards a 'union' of European states of people as well as economical development. Consequently I shall firstly begin by mentioning the historical developments of the European Union, which lead to the creation of the four main institutions of the EU and a number of treaties being passed to govern the member states that joined the EU. Secondly I will move onto mentioning the key provisions of the Treaty of Maastricht followed by stating how the treaty affects European business. Finally to conclude this essay with a brief summary of whether the treaty has made any differences in the lives of working Europeans and the business they are involved in. The building of a United Europe is undoubtedly one of the greatest historical undertakings of the 20th century.1 The original impetus for the founding of the European Union was the desire to repair Europe after the unfortunate events of World War II and to prevent Europe from ever again falling victim to the scourge of the war. ...read more.

Critics of the UK position argue that the refusal to adopt minimum working conditions (and also a minimum wage) will make the UK the 'sweat-shop' of Europe. 11 The expectation of the treaty of Maastricht was that the functioning of the common market, in conjunction with the Treaty's rules preventing unfair competition, would automatically result in social development. When the EU was set up there was rapid economic growth therefore the underlying objectives of European social policy were to avoid any distortion of competition and to promote free movement of labour within the community. Because it was feared that unfair competition might emerge if some countries imposed higher social charges on employment, leading to social dumping as companies relocated to areas with lower labour costs. Therefore the creation of a common market formed areas without barriers in which the free movement of goods, services and capital in accordance with the provisions of the treaty.12 Now moving onto discussing how the Maastricht treaty affects European Business. The introduction of the Maastricht has affected European business in many ways. The 1985 agenda for the single market intended at removing all non-tariff barriers to the free movement of goods, persons, services and capital. It became clear, that the benefits of the internal market would be difficult to achieve with the uncertainties created by exchange rate fluctuations and the high transaction costs for converting one currency into the other. Therefore the single currency was seen as the vital piece in the single market development. ...read more.

However the union is now moving towards greater political and economic unity through the adoption of a single currency and the co-ordination of members states in relation to areas of state policy, such as defence and security, and justice and home affairs. Consequently to achieve such a Union there must be further sacrifice of national sovereignty. Consequently if Britain had joined the single market and adopt the single currency, the major decisions in economic policy would be taken centrally rather than by individual national governments.14 1 http://europa.eu.int/abc/obj/chrono/40years/en.htm 2 Page 4, Vincenzi, 1999 3 Page 15, Jo Shaw 2000 4 The six member states included France, Germany, the Netherlands, Italy, Luxembourg and Belgium 5 Page 4, Kent, 2001 6 Since 1993 when the Treaty of European Union came into force, the EEC has been redesignated as the 'European Community' (EC) 7 The central aim of EEC Treaty set in article 2 EC, was to establish a customs union among the six founding members, based on the 'four freedoms'; freedom of movement of goods, services, capital and people. 8 PJC also known as Co-operation on justice and home affairs (JHA) 9 Page 7, Jo Shaw, 2001 10 See Appendix One, for a diagram of the EU's pillar structure after the treaties of Maastricht and Amsterdam. 11 Page 6, Cavendish Cards 12 Page 279, d**k Leonard, 1997 13 The 11 countries of the euro zone are: Austria, Belgium, Finland, France, Germany, Ireland, Italy, Luxembourg, Netherlands, Portugal and Spain 14 http://www.no-euro.com/release.cfm?IDNO=15 Nafeeza Javed - 1 - ...read more.