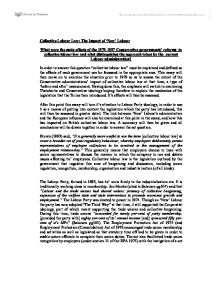 What were the main effects of the 1979-1997 Conservative governments&amp;#146; reforms to collective labour law and what distinguishes the approach taken by the current Labour administration?

Collective Labour Law: The Impact of 'New' Labour What were the main effects of the 1979-1997 Conservative governments' reforms to collective labour law and what distinguishes the approach taken by the current Labour administration? In order to answer this question "collective labour law" must be explained and defined so the effects of each government can be focussed in the appropriate area. This essay will then move on to examine the situation prior to 1979 so as to assess the extent of the Conservative administrations' impact of collective labour law at that time, a type of 'before and after' measurement. Having done this, the emphasis will switch to examining Thatcherite and Conservative ideology hoping therefore to explain the mechanics of the legislation that the Tories then introduced. It's effects will then be assessed. After this point this essay will turn it's attention to Labour Party ideology, in order to use it as a means of putting into context the legislation which the party has introduced, this will then be assessed in greater detail. The link between 'New' Labour's administration and the European influence will also be examined at this point in the essay, and how this has impacted on British collective labour law. A summary will then be given and all conclusions will be drawn together in order to answer the set question. Brown (1993) said, "It is generally more useful to use the term [collective labour law] to cover a broader set of joint regulatory behaviour, whereby employers deliberately permit representatives of employee collectives to be involved in the management of the employment relationship." This generally means that employers choose to liase with union representatives to discuss the manner in which the company is run and debate issues affecting its' employees. Collective labour law is the legislation outlined by the government that regulates this area of bargaining and discussion, including union regulation, recognition, membership, organisation and industrial action (of all kinds). ...read more.

The s*x Discrimination Act 1986; this removed the exemption that the small firms (five or less employees) had from the s*x Discrimination Act of 1975. The Employment Act 1988; under this act a union must hold separate ballots for industrial action if those who are likely to take part in such action have different places of work. Ballot papers must ask whether the member is prepared to take strike action or action short of a strike. Members were given the right not to be 'unjustifiably disciplined' by their union, and a new commissioner for the Rights of Trade Union Members was appointed. The Employment Act 1990; when this act was passed pre-entry closed shops became illegal, unions became vicariously liable if any of its' officials called for strike action without following the proper procedures, employers were given greater freedom to dismiss any employee taking unofficial strike action, and further restrictions were placed on secondary action. Trade Union Reform and Employment Rights Act 1993; under this act employees were given the right to decide which union they joined. Postal ballots had to take place now before any strike could occur, and unions had to provide employers with at least seven days notice before any strike action could take place. The twenty-six wage councils were abolished and ACAS' requirement to 'encourage collective bargaining' was removed. At the end of the Conservative run of administration (finally finishing with John Major as Prime Minister in 1997) it is evident that the legislation very much followed the Conservative ideology of individualism, legislating for the individual and stripping collectives of their powers, as evidenced by the following figures. In 1990 the Transport and General Workers Union membership stood at 1224000, the Amalgamated Engineering Union at 702000 and the General Municipal Boilermakers Union membership stood at 865000. In 1978 the total number of working days lost that year was 9405000 but in 1995 that number was just 415000. ...read more.

1999 trade union membership stood at a combined total of 7801315 employees, an increase from 1997 (when 'New' Labour came to power) of 647315. The number of working days lost due to industrial action also dropped in 1999 to 266400 from 415000 in 1999, a drop of 148600 (all above figures from Salmon pg113). So as can be seen above the actions of both parties during their respective administrations have had a profound effect on collective labour law and collective bargaining, with the Tories having most impact. Labour is conspicuous in that it has done comparatively little to over turn the Tory instigated legislation. The actions of both parties can be explained by their ideologies, with Labours changing radically during the last decade. Their approaches have differed in that the Conservatives stripped the unions (which are the primary partners in bargaining and negotiation) of the majority of their rights and were not concerned with how ruthlessly it was done. The individuals' rights were improved, but only as a means of weakening union power and increasing the strength of big businesses and employers in accordance with Conservative thinking and strategy. The Tories refused to sign up to the Social Chapter as they believed that employment legislation should come from within the country that is to be affected by it and in joining would lose total legislative control. In contrast to this Labour have signed up to the Social Chapter and tried to make the employment situation better for employees as individuals. This is because according to the third Way which "creates a perceived political and cultural ideology within which management, unions and employees have to work" (Salmon pg 21) it would benefit both employers and employees. It can be seen from this that both parties have similar outcomes from their legislation (in so much as figures for union membership and days lost in industrial action have only improved in comparatively mediocre terms and figures) though each party has taken a different approach for differing reasons. ...read more.