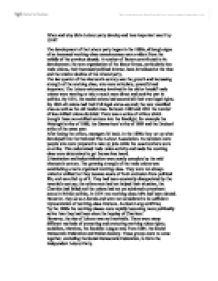 When and why did a Labour party develop and how important was it by 1914?

When and why did a Labour party develop and how important was it by 1914? The development of the Labour party began in the 1880s, although signs of an increased working-class consciousness were evident from the middle of the previous decade. A number of factors contributed to its development; the new organisation of the labour forces, particularly into trade unions, their increased political interest, laws introduced at the time and the relative decline of the Liberal party. The last quarter of the nineteenth century saw the growth and increasing strength of the working class, who were articulate, powerful and important. The Labour aristocracy involved in the old or 'model' trade unions were wanting to take a much more direct and positive part in politics. By 1875, the model unions had secured all their own legal rights. By 1885 all unions had their full legal status secured; the new unskilled ones as well as the old model ones. Between 1889 and 1891 the number of less skilled unions doubled. There was a series of strikes which brought these non-skilled workers into the limelight, for example the Matchgirl strike of 1888, the Gasworkers' strike of 1889 and the Dockers' strike of the same year. After losing the strikes, managers hit back. In the 1890s they set up what developed into the National Free Labour Association. Its members were people who were prepared to take up jobs while the usual workers were on strike. ...read more.

They were soon joined as MPs by Ramsey MacDonald and Phillip Snowdon. The Independent Labour Party was formed in 1893, and it began to get itself heard. However, there were still problems. In 1895 all twenty-eight Labour candidates were defeated, including Hardie. In 1899 the Trade Union Conference and Amalgamated Society of Railway Servants passed the resolution; 'we must secure better representation of the interests of Labour in the House of Commons.' This led to the establishment of the Labour Representation Committee. This was the Labour Party in all but name. A meeting was set up, and 129 delegates came to discuss what should be done. They were representatives from all socialist groups. The Socialist Democratic Party dropped out however, as the decisions were not radical enough for them. In 1900 Hardie and Bell were elected as Labour MPs, and were soon joined by Arthur Henderson. By 1906 they had twenty-nine MPs. The Taff Vale case of 1901 happened as a result of a strike at the unfair dismissal of a railway worker. After the strike, the managers sued the union and it was forced by the House of Lords to pay �23,000. Both unions and individual unionists could be sued, which very much restrained union action, and was seen as an insult on the rights of workers. It drove more unionists to support Labour. ...read more.

The issue of how important the Labour party was by 1914 is an extremely contentious one. Keith Laybourn explains; 'Labour's pre-war parliamentary performance was hardly indicative of the true level of its appeal.' It is true that it is hard to assess the party's real importance by 1914, as while it amassed huge levels of trade union support, this was not transferred to votes because of the party's financial restrictions and the limited franchise of the time. However, the rise from two MPs in 1900 to 42 in 1910 still represents an impressive first decade, which perhaps indicated that its popularity would continue rising after 1914. The historian Jack Reynolds confirmed this belief, concluding that Labour was progressing well before 1914 as long as she kept close links with trade unions, which she invariably did. This is disputed however by the historian Roy Douglas, who stated: 'No shred of evidence existed anywhere which might suggest that within 10 years the Labour party would be forming the government of the country.' The historian Derek Tanner went as far as saying that in fact Labour was in deep trouble by 1914, appearing to be past its peak, and was only saved by the war. This is probably an exaggerated perspective, as while Douglas is correct in stating that Labour's subsequent successes could not have been prognosticated, when their severe restrictions are taken into consideration, the meagre success they experienced before 1914 was promising and augured well for the future. ...read more.