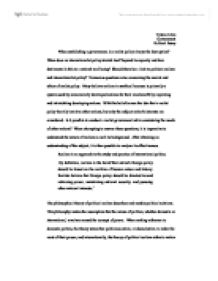 When establishing a government, is a realist policy always the best option? When does an internationalist policy stretch itself beyond its capacity and how detrimental is this to a nation's well being?

Tristan Allen Government Political Essay When establishing a government, is a realist policy always the best option? When does an internationalist policy stretch itself beyond its capacity and how detrimental is this to a nation's well being? Should there be a limit to political realism and internationalist policy? Numerous questions arise concerning the morals and ethics of realist policy. Many believe realism is unethical because is primarily a system used by economically developed nations for their own benefit by exploiting and intimidating developing nations. With this belief comes the idea that a realist policy heavily involves other nations, but only the subject nation's interests are considered. Is it possible to conduct a realist government while considering the needs of other nations? When attempting to answer these questions, it is imperative to understand the nature of realism as well its background. After obtaining an understanding of the subject, it is then possible to analyze its effectiveness. Realism is an approach to the study and practice of international politics. By definition, realism is the belief that nation's foreign policy should be based on the realities of human nature and history. Realists believe that foreign policy should be directed toward achieving power, maintaining national security, and pursuing other national interests.1 The philosophical theory of political realism describes and models political relations. This philosophy makes the assumption that the nature of politics, whether domestic or international, revolves around the concept of power. When making reference to domestic politics, the theory states that politicians strive, or should strive, to make the most of their power; and internationally, the theory of political realism refers to nation states being the primary agents that maximize, or should maximize, their power. Because the basis of this theory refers to what authoritative positions of power do, or should do, it can be said either to be a suggestion of what a state should do, which is pursuing their own interests, or as an analysis of the manner in which states and politicians aspire only to achieve their own interest. ...read more.

The objective of the fifth principle of realism is to establish that realism is not based upon moral principles, but upon national interest. It concludes by saying states that proclaim that their national interest is based heavily on moral and ethical issues are reflective of idealism and not political realism. The sixth and last principle is simply a summation of the concept of realism. It is Morgenthau's attempt to bridge the gap. When speaking of the sixth principle, Morgentahu says: "Intellectually, the political realist maintain the autonomy of the political sphere, as the economist, the lawyer, and the moralist maintain theirs. He thinks in terms of interest defined as power, as the economist thinks in terms of interest defined as wealth; the lawyer, of the conformity of action with legal rules; the moralist, of the conformity of action with moral principles." Morgethau also attempts to describe the mindset of a political realist using the sixth principle. He infers that realist are not able to mentally acknowledge the existence of other trains of thought outside of politics. Political realism in essence reduces to the political-ethical principle that might is right social and hence political growth in terms of a struggle in which only the fittest (strongest) cultures or polities would survive. Political realism assumes that interests are to be maintained through the exercise of power, and that the world is characterized by competing power bases. In international politics, most political theorists emphasize the nation state as the relevant agent, Whilst the social Darwinist branch of political realism may claim that some nations are born to rule over others (being 'fitter' for the purpose, and echoing Aristotle's ruminations on slavery in Book 1 of the The Politics), generally political realists focus on the need or ethic of ensuring that the relevant agent (politician, nation, culture) must ensure its own survival by securing its own needs and interests before it looks to the needs of others. ...read more.

Nonetheless, the realist may admit this and retort that despite the gains from trade, nations should not rely on others for their sustenance, or that free trade ought not to be supported since it often implies undesired cultural changes. In that respect, the nation's interests are defined as lying over and above any material benefits to be gained from international collaboration and co-operation. The right to a separate cultural identity is a separate Political realists are often characterised as a-moralists, that any means should be used to uphold the national interest, but a poignant criticism is that the definition of morality is being twisted to assume that acting in one's own or one's nation's interests is immoral or amoral at best. This is an unfair claim against serving one's national interest, just as claiming that any self-serving action is necessarily immoral on the personal level. The discussion invokes the ethics of impartiality; those who believe in a universal code of ethics argue that a self-serving action that cannot be universalized is immoral. However, universalism is not the only standard of ethical actions. Partiality, it can be claimed, should play a role in ethical decisions; partialists deem it absurd that state officials should not give their own nation greater moral weight over other nations, just as it would be absurd for parents to give equal consideration to their children and others' children. But if morality is employed in the sense of being altruistic, or at least universalistic, then political realists would rightly admit that attempting to be moral will be detrimental to the national interest or for the world as a whole, and therefore morality ought to be ignored. But, if morality accepts the validity of at least some self-serving actions, then ipso facto political realism may be a moral political doctrine. 1 Kelman, Steven. p. 598. 2 Political Realism (International Encyclopedia) 3 Political Realism, 2003. 4 Political Realism, 2003. 5 Political Realism, 2003. 6 Pine, Major Shawn. 2002. 7 Pine, Major Shawn. 2002. 8 Pine, Major Shawn. 2002. 9 Morgenthau, Hans J. (1978) 10 Six Principles of Realism 11 Kelman, Steven. p. 598. ...read more.