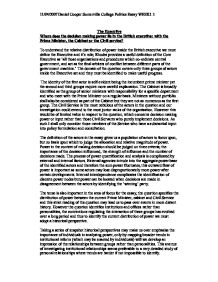 Where does the decision making power lie in the British executive: with the Prime Minister, the Cabinet or the Civil service?

The Executive Where does the decision making power lie in the British executive: with the Prime Minister, the Cabinet or the Civil service? To understand the relative distribution of power inside the British executive we must define the Executive and it's role; Rhodes provides a useful definition of the Core Executive as 'all those organisations and procedures which co-ordinate central government, and act as the final arbiters of conflict between different parts of the government machine.' The domain of the question covers only three groups of actors inside the Executive set and they must be identified to make useful progress. The identity of the first actor is self-evident being the incumbent prime minister yet the second and third groups require more careful explanation. The Cabinet is broadly identified as the group of senior ministers with responsibility for a specific department and who meet with the Prime Minister on a regular basis. Ministers without portfolio shall also be considered as part of the Cabinet but they are not as numerous as the first group. The Civil Service is the most nebulous of the actors in the question and our investigation could extend to the most junior ranks of the organisation. However this would be of limited value in respect to the question, which concerns decision making power or input rather than those Civil Servants who purely implement decisions. As such I shall only consider those members of the Service who have a substantial input into policy formulation and consultation. ...read more.

The Minister is accountable for these responsibilities in front of parliament and thus the fulcrum of decision-making power is the Minister with Parliament usually only an exceptional check to that power. Thus the Westminster model completes a link between the sovereignty of Parliament, the Cabinet and every Government official who is theoretically under the watchful eye of the first group who grant them legitimacy. The mechanism of accountability places the majority of decision-making power with the Cabinet Ministers as they control the direction of the departments and the response to criticism. This process of accountability is not perfect and recent examples have demonstrated that when the principle of accountability disappears the Westminster model fails in many respects and new perceptions of power distribution emerge. The Scott Report demonstrates that answers to Parliamentary questions are sometimes 'economical with the actualitie' .The case concerned the exports of military machine tools to Iraq by Matrix Churchill. These exports were conducted with the assistance of the government who relaxed the checks on final export destinations in order to let the shipments continue. The controversy arose when a Parliamentary question asked if the policy of restricted exports to Iraq had been relaxed. The Minister in charge replied they had not because technically only the stringency of implementation had been relaxed not the policy itself. The civil service was instrumental in this conceit by preparing the answer to the question. The resulting scandal almost resulted in the imprisonment of the Directors of Matrix Churchill and highlighted the weaknesses in accountability. ...read more.

During his tenure this was partially true but strong tensions in the Cabinet over European issues meant that policies were often discussed collectively but decided individually. As his term progressed may saw his malaise surrounding party discipline as the result of a structure intended for a strong leader being occupied by a weaker one. The conclusion from this thread of historical progression is that Thatcher fundamentally shifted the decision-making power toward the Prime Minister both through structure and agency. This conclusion may also superficially answer the question as recent history demonstrates power is flowing toward the Prime Minister yet it would be incoherent to ignore completely my first and second threads detailing the supremacy of the Cabinet and Civil Service respectively. To synthesise these three apparently contradictory arguments into a consistent whole there must be initial recognition in the partial truth contained in each; the application of the Rhodes Model shows the way in which both structure and agency can influence decision-making power. Thatcher showed the Prime Minister has the ability to reform structures and increase centrally held power resources, yet the manipulation of structure will never place all the power resources with one group. Power is spread and the distribution of decision-making influences depends on the exchange and flow of resources like information and authority within a network far bigger than the identified domain. Ultimately decision-making power never lies in the British Executive; it is always on the move. ...read more.