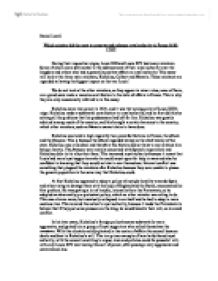 Which minister did the most to preserve and enhance royal authority in France 1610-1715?

Daniel Lovell Which minister did the most to preserve and enhance royal authority in France 1610-1715? During their respective reigns, Louis XIII and Louis XIV had many ministers. Some of whom were detrimental to the advancement of their royal authority over the kingdom and others who had a generally positive effect on royal authority. This essay will look at the three main ministers, Richelieu, Colbert and Mazarin. These ministers are regarded as having the biggest impact on the two Louis'. We do not look at the other ministers, as they appear in minor roles; none of them, on a grand scale make a massive contribution to the state of affairs in France. This is why they are only occasionally referred to in this essay. Richelieu came into power in 1624, and it was the turning point of Louis XIII's reign. Richelieu made a substantial contribution to royal authority, and he first did this by solving all the problems that his predecessors had left for him. Richelieu was greatly admired among much of the country, and this brought a certain harmony to the country, which other ministers, such as Mazarin cannot claim to have done. ...read more.

Many ministers also adopted this policy, but few were as successful as Richelieu in this area. Richelieu had a very strong social policy, in theory. However, the state that he gained political influence in was poor. Previous ministers had left the country in disarray, giving Richelieu the hardest job out of all the ministers. After the 30 years war, taxes had to be raised to gain back all the money that was lost. This proved unpopular among the general public and lead to many revolts. These were common place in all countries in this period however, and it is how Richelieu dealt with the overlying problem that is important. Richelieu created a great clientele of cr�atures and spread the responsibility among them, thus removing himself from most of the responsibility. This did not strengthen France, in fact, it weakened it. However it could be looked upon in a more positive way. With the responsibilities spread out between many people, they could all focus on different areas of the problem which was what eventually happened. Richelieu, in conclusion, overall, increased the royal authority, but only by a very small margin. He caused many problems and then had to solve them himself. ...read more.

he had a great contribution to French internal society. Colbert was the best financial mind of his time; he estimated that the crown was 451 million livres in debt in 1661. Colbert reduced the expenditure of tax farms as his first act, the originally collected in approximately 36 million livre, but 26 million of that was spent on the collection costs. Colbert made them more efficient and took the first step to reducing royal debts. Over the next decade Colbert introduced intendants into French society to collect money. He eventually wiped out French debt, not an easy task! Colbert increased royal authority because he was able to decrease the debt and put France back in the black. This meant that Louis had money to wage wars with and to follow his main goal of gloire. This increased respect for Louis XIV and therefore increased his royal authority. In conclusion, Richelieu was the most successful of all ministers as he increased royal authority the most. He did however create a lot of problems for himself, but not to the same extent that Mazarin did. He was not the greatest financial mind of the time, but because he had more power than Colbert he was able to make a bigger contribution, thus allowing us to say that he did the most to preserve and enhance royal authority in France 1610-1715. ...read more.