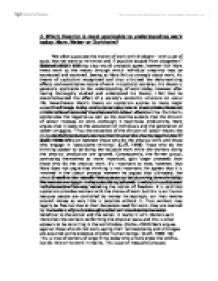 Which theorist is most applicable to understanding work today, Marx, Weber or Durkheim?

2. Which theorist is most applicable to understanding work today, Marx, Weber or Durkheim? "We often associate the notion of work with drudgery - with a set of tasks that we want to minimize and if possible escape from altogether." (Giddens, 2001: 375) Many of today's working class would probably agree, however Karl Marx views work as the means through which individual creativity may be expressed and explored. Seeing as Marx felt so strongly about work, his theory of capitalism recognized and thus criticized the dehumanizing effects and exploitative nature of work in capitalist societies. His theory is generally applicable to the understanding of work today, however after having thoroughly studied and understood his theory, I felt that he overemphasized the effect of a society's economic structure on social life. Nevertheless Marx's theory on capitalism applies to many major aspects of work today and appreciates, more than other theorists, problems faced by today's society and its labour at work. The change in the occupational structure in society today is based on the phenomenon of the division of labour. Marx, unlike Durkheim, appreciates the negative as well as the positive aspects that the division of labour imposes on work. ...read more.

The theory states that 'all forms of wealth, created for purposes of exchange, get their value from the work put into producing them' (Kettle, 1963: 32). It distinguishes between use (or intrinsic)-value and exchange-value. In the past use-value was important. People simply exchanged objects or used money to exchange goods however, in capitalist societies, exchange value is prioritised. Capitalists aim to turn commodities into money. In other words, owners are generating wealth out of human labour. For example, production by labour is exchanged for an unequal exchange of wages. Capitalists made workers work more than they (the workers) received in return, in the form of wages. The needs of people are downgraded in favour of the desires of consumers and the desires of consumers are satisfied based on the amount of money the consumers are willing to pay. This is displayed in societies today where dominance lies with those with the most money. Hence Marx argues that exchange value is dangerous and increasingly, everything will become dominated by exchange value, even morality. Marx classified labour as a unique commodity that creates value, arguing that it should not be reduced to exchange value because we are purchasing an individual's time and generating use value out of it. ...read more.

Therefore in an industrial world, we lose sight of many humanitarian considerations. Finally, members of society also face alienation from our community, as a population. People's relationships revolve around money and the exchange involved between members of society. Our social community has very little importance in many of our lives. Eventually humans begin to behave like economic animals. Marx's theoretical interpretation of capitalism coincides well with the society and the work lives that we encounter today. In my opinion, his focus on the treatment of human labour is fundamental to understanding work today. Nevertheless, Marx's thought overemphasizes the economic structure of society and its influential role on social life. I agree that as a result of competition, innovation and several other capitalistic features in society, many have become increasingly economic-minded and work has had de-humanising effects on many of us, however, for some, work is still an expression of individual creativity. Despite that, I found that I agreed with most of Marx's theory and developed a better and a more realistic understanding of work today. Although I agree with Weber's theory of rationalisation and feel that his interpretation of capitalism is somewhat similar to Marx's, I feel as though Weber neglected to focus adequately on the issue of the exploitation of work today. Marx seemed to appreciate the most the essence of human labour. ...read more.