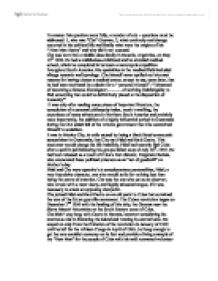 Who was &quot;Che&quot; Guevara, 2, what continuity and change occurred in his political life and finally what were the origins of his &quot; New Man theory&quot; and why did it not succeed.

To answer this question more fully, a number of sub - questions must be addressed. 1, who was "Che" Guevara, 2, what continuity and change occurred in his political life and finally what were the origins of his " New Man theory" and why did it not succeed. Che was born into a middle class family in Rosario, Argentina, on May 14th 1928. He had a middleclass childhood and he attended medical school, which he completed in between a motorcycle expedition throughout South America. His specialties in the medical field included allergy research and leprology. Che himself never spelled out his exact reasons for having chosen a medical career, except to say, years later, that he had been motivated by a desire for a " personal triumph": "I dreamed of becoming a famous investigator ......... of working indefatigably to find something that could be definitively placed at the disposition of humanity"i It was only after reading many pieces of important literature, the completion of a personal philosophy index, much travelling, the experience of many adventures in Northern South America and probably most importantly, the addition of a highly influential period in Guatemala during the CIA aided fall of the Arbenz government that Che committed himself to socialism. ...read more.

were bleeding Latin America of all is national resources, and it was from this which started his intense hatred of America. From this visit, Che, a trained doctor had diagnosed an inherent disease, which was "capitalism" which stemmed from all the American injustices he witnessed. At the time he was going back to Argentina in early 1952 he had witnessed all the social injustices of especially America and he realised something needed to be done, however it is important to realise that, by this stage he was still young and had no political experience or background. Che political life only really began during his next trip around Latin America. " I realise something that was growing inside of me for some time ....... Has now matured; and is the hate of civilisation, the absurd image of people moving like locos to the rhythm of that tremendous noise that seems to me like a hateful antithesis of peace"iv. Especially in Guatemala were he embraced the concept of freedom. In regards to Guatemala Che told his family that " this was the country in which one could breath the most democratic air in South America"v, however because of his Argentinean background and his strong Marxist beliefs he had to leave Guatemala and so he went to Mexico and Met Castro. ...read more.