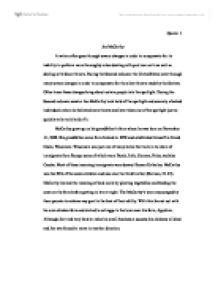 Who was Joe McCarthy?

Qasimi 1 Joe McCarthy A nation often goes through severe changes in order to compensate for its inability to perform more thoroughly when dealing with post war era's as well as dealing with future threats. During the Second red scare the United States went through many severe changes in order to compensate for the silent threats made by the Soviets. Often times these changes bring about certain people into the spotlight. During the Second red scare senator Joe McCarthy took hold of the spotlight and severely attacked individuals whom he believed were threats and later taken out of the spotlight just as quickly as he took hold of it. McCarthy grew up on his grandfather's farm where he was born on November 14, 1908. His grandfather came from Ireland in 1858 and established himself in Grand Chute, Wisconsin. Wisconsin was just one of many states that took in its share of immigrants from Europe some of which were Dutch, Irish, German, Poles, and also Czechs. Most of these incoming immigrants were devout Roman Catholics. McCarthy was the fifth of the seven children and was also the third brother (Herman, 21-22). McCarthy learned the meaning of hard work by planting vegetables and feeding the cows on the farm before getting in late at night. The McCarthy's were encouraged by there parents to achieve any goal to the best of their ability. ...read more.

He also said that he flew with the dive bombers, hence the name "Tail Gunner Joe". Although his story had some truth to it, the real reason was that Joe was complaining about the way pictures were being taken in the air so he was instructed to do it himself. He also was only up in the air roughly a dozen times while the dive bomber squad was on the frontline for seven months (Herman, 32-33) McCarthy got nationwide recognition when he gave a speech at Wheeling, West Virginia on February 9, 1950. In his speech he accused certain people in the state department for being or supporting communist. The media obviously took this and spun the story nationwide; McCarthy's name was used in every house in America (Rovere, 6). After this McCarthy became chairman of the Committee on Government Operations and also of the Permanent Subcommittee on Investigations. Through this Joe was able to organize a group of people through various government organizations ranging from the FBI to the State Department. These people would only answer to him and bring him information on any suspicious communist activity. They went so far as to call themselves "the loyal American Underground". McCarthy justified receiving classified information by saying " I would like to notify two million federal employees that it is their duty to give us the information they have about graft, corruption, Communist, and treason, and that there is no loyalty to a superior officer that can tower above their loyalty to their country" (Rovere, 24-26). ...read more.

McCarthy rose to the ranks from rags to riches; he went from being a little farm boy from Wisconsin to representing Wisconsin in the United States Senate. McCarthy got widespread attention when he started heading investigations on ousting alleged communists in the United States government. There was nothing wrong when Joe took charge of this task but then he used it to strong arm and intimidate anyone including his colleagues in the senate as well as president Eisenhower. When McCarthy started applying his gift of using the media for other political reasons instead of ousting communists he basically dug his own grave. Welch made him look look like a fool by using Joe's love of the spotlight against him. He basically used McCarthy's gift for the media against him during the army McCarthy hearings. After this when they knew he no longer was a heavy threat the senate mainly Johnson and new deal democrats made sure to censure him. This undoubtedly marked McCarthy's fall from the spotlight where he struggled so hard to get. To this day people still use the term McCarthyism; A term that was coined by Herbert Block of the Washington post. In His book Rovere defines McCarthyism by saying" To the one whatever is liberal, repressive, reactionary, obscurantist, anti-intellectual, totalitarianism, or merely swinish all of some time to come be McCarthyism, while to the other it means nothing more or less than militant patriotism"( 7). ...read more.