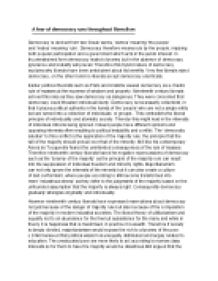 ﻿A fear of democracy runs throughout liberalism Democracy is derived from two Greek works, ?demos? meaning ?the people? and ?kratos? meaning ?rule?. Democracy therefore means rule by the people, implying both popular participation and a government which acts in the public interest. In its unrestrained form democracy leads to tyranny but in the absence of democracy ignorance and brutality will prevail. Therefore this hybrid nature of democracy explains why liberals have been ambivalent about its benefits. Very few liberals reject democracy, on the other hand no liberals accept democracy uncritically. Earlier political theorists such as Plato and Aristotle viewed democracy as a chaotic rule of masses at the expense of wisdom and property. Nineteenth century liberals echoed this idea as they saw democracy as dangerous. They were concerned that democracy could threaten individual liberty. Democracy is necessarily collectivist, in that it places political authority in the hands of the ?people? who are not a single entity but are turned into a collection of individuals or groups . ...read more.

Therefore he believed elected politicians should speak for themselves rather than reflect the views of their electors and suggested a system of plural voting that would deprive the illiterate from power . This argument demonstrates a liberal disdain for representative government, a key feature of democracy. Nevertheless, the liberal arguments against both majoritarianism and representative government demonstrate a deeper mistrust in liberals of universal suffrage. Such fears of tyranny of majority by the uneducated poor as a result of the arrival of mass democracy which result into the destruction of a civilized society and moral order are also expressed by Gasset. Moreover liberals feared excessive democracy because democratic systems that widen access to political influence tend to be characterized by growth in interventionism and the problem of over-government. Such intervention may weaken the efficiency of market capitalism and therefore contradict early liberals? belief that the market should be free from government interference. As a result excessive democracy may disadvantage the mass of citizens in the long run. ...read more.

Since the twentieth century liberal theories about democracy have tended to focus less on consent and participation and more on the need for consensus in society.Pluralist theorists have argued that organized groups,not individuals, play the most important role in the politics of increasing complex modern societies which are characterized by competition amongst rival interests.Therefore democracy has the benefit that, in giving a political voice to all competing groups and interests in society it binds them to the political system and tends to promote consensus thereby maintaining balance and political stability within modern societies. Nineteenth century liberals mostly feared democracy but as time went by liberals of the twentieth century came to recognize its benefits .Even though there are conflicting ideas within liberalism and democracy ,the liberal acceptance of universal suffrage, the key feature of democracy, has led to an acceptance to all the elements of democracy including majority rule and representative government. This is because liberals were able to create solutions to prevent the extremes of democracy .This can be seen with the example of majoritarianism when the liberal element of checks and balances prevents the tyranny of the majority. ...read more.