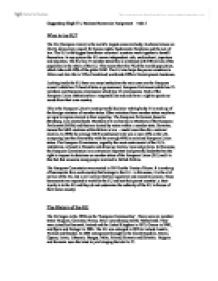 Why belong to the EU

What is the EU?

The EU (European Union) is the world’s largest economic body; its shared values are liberty, democracy, respect for human rights, fundamental freedoms and the rule of law. The EU is the biggest benefactor as several countries work together to benefit themselves. In my opinion the EU means independent, rich, multicultural, importers and exporters. The EU has 27 member states this is combined with 490 million of the population in the whole of the EU. This means that this 7% of the worlds population, which links with 30% of the global GDP. The EU also helps the poorer countries in Africa and Asia this is 55% of combined worldwide Official Development Assistance.

This is the European Union’s most powerful decision-making body. It is made up of the foreign ministers of member states. Other ministers from member states may have an input in topics relevant to their expertise. The European Parliament, based in Strasburg, is an elected body. Members of it are known as Members of the European Parliament (MEPs) and they are elected by voters within a member state. However, turnout for MEP elections within Britain is low – much lower than for a national election. In 1999, the average MEP constituency vote was a mere 23% in the UK, comparing less than favourably with the average 60% in mainland European Union states. The European Commission, arguably the most controversial of the EU’s institutions, is based in Brussels and draws up treaties, laws and policies. In this sense, the European Commission is an extremely important and powerful body that has the right to impose its decisions on member states of the European Union (EU) and it is this fact that concerns many people involved in British Politics.

The European Commission was created in 1957 by the Treaty of Rome. It is made up of bureaucrats from each country that belongs to the EU - in this sense; it is the civil service of the EU, but a civil service that has legislative and executive powers. These bureaucrats are expected to work for the EU and not their parent country i.e. their loyalty is to the EU and they do not undermine the authority of the EU in favour of their home country.

The History of the EU

The EU began in the 1950s as the ‘European Communities’. There were six member states: Belgium, Germany, France, Italy, Luxembourg and the Netherlands. They were joined by Denmark, Ireland and the United Kingdom in 1973, Greece in 1981, and Spain and Portugal in 1986. The EU was enlarged in 1995 to include Austria, Finland and Sweden. In 2004 enlargement brought in the Czech Republic, Etonia, Cyprus, Latvia, Lithuania, Hungry, Malta, Poland, Slovenia and Slovakia. Bulgaria and Romania were the latest to join bringing the total to 27.

To join the EU, a country must have a stable democracy respecting human rights and the rule of law; a functioning and competitive market economy; and the acceptance of the obligations of membership, including EU laws and policies. Any democratic European country can apply to join and all member states have a right to vote in the EU.

In 1993 the European Union was formed, the UK joined the EU on 1st January 1973 as the UK had to apply twice to finally join the EU. Since joining the Union, the UK continually plays a crucial role in the bloc. Most British government departments are involved in EU-wide activities, which cover areas such as justice and home affairs, agriculture, trade policy and competition policy.