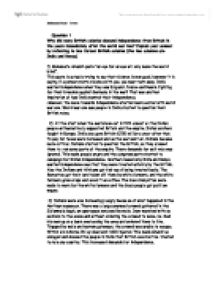 Why did many British colonies demand independence from Britain in the years immediately after the world war two? Explain your answer by referring to two former British colonies (the two colonies are India and Kenya).

Question 1 Why did many British colonies demand independence from Britain in the years immediately after the world war two? Explain your answer by referring to two former British colonies (the two colonies are India and Kenya) 1) Mahamata Ghandi quote "an eye for an eye will only make the world blind". This quote is actually trying to say that violence is now good, however it is saying if a person starts violence with you, you must turn away. India wanted independence when they saw England, France and Russia fighting for their freedom against Germany in the war? That was another inspiration of how India wanted their independence. However, the move towards independence started much earlier with world war one. World war one saw people in India started to question their British rules. 2) At the start when the war broke out in 1914 almost all the Indian people enthusiastically supported Britain and the empire. Indian soldiers fought in Europe. India also gave Britain �100 million a year after that. To pay for taxes were increased and as the war went on, Indians became more critical. Indians started to question the British, so they allowed them to run some parts of the empire. There demands for self-rule was ignored. ...read more.

they wanted to unite together because they were driven and were weak after WW2, so they wanted to start up trade and industry again. When it was first discussed in the 1940s some people thought that it would quickly develop in to United States of Europe a new super power. Forty years later it was still not clear whether this might happen, but the European community has become on of the worlds economic organisations the biggest apart from china. Also the ECSC was set up. There were six members of the ECSC which is France, West Germany, Belgium, Holland, Luxembourg and Italy. They agreed to put all coal and steel production under a joint authority on which all six government would represent. But the EEC did not really trust West Germany, so they were putting West Germany's coal and steel industries under international authority helped by giving West Germany's neighbours some control over the factories, from which the steel for armour would come. The EEC did this because they would be able to control what would be made out of coal and steel, which means that Germany wont be able to make any of weapons. Germany didn't make weapons because the European countries would feel and be safer. 3) ...read more.

Socially Britain got help from the EEC by the EEC paying money for the poor and suffering areas. Then culturally Britain has been affected by the EEC because it would be much easier for them to go around Europe and learn about other peoples cultures. 5) Britain's membership why the EEC have got a tremendous impact on the British. Politically we had two companies and the relationship became more close to Europe and less close to Europe and less close to the common wealth. Sovereignty was still an issue because the British were thinking why it is worth losing their super power and became a normal country in the EEC. Economically Britain has benefited a huge market, but the CAP has caused many arguments because the farmers specially the French and German farmers were making a lot of money. Which meant the farmers were protected especially people were closer to other European countries because of the free trade, where they can travel freely. I believe that joining the EEC would be a good thing because Britain would be able to make large markets and they would be getting money from the EEC to help them in pore areas. Also British people can vote for members of the European parliament. Mohamed Omar 11rwe ...read more.