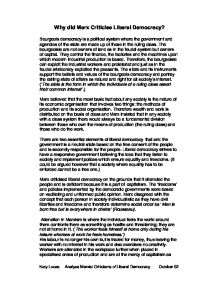 Why did Marx Criticise Liberal Democracy?

Why did Marx Criticise Liberal Democracy? Bourgeois democracy is a political system where the government and agencies of the state are made up of those in the ruling class. The bourgeoisie are not owners of land as in the feudal system but owners of capital. They control the finance, the factories and the machines upon which modern industrial production is based. Therefore, the bourgeoisie can exploit the industrial workers and proletariat and just as in the feudal aristocracy exploited the peasants. The state and its instruments support the beliefs and values of the bourgeois democracy and portray the exiting state of affairs as natural and right for all society's interest. ('The state is the form in which the individuals of a ruling class assert their common interest'.) Marx believed that the most basic fact about any society is the nature of its economic organisation that involves two things: the methods of production and its social organisation. Therefore wealth and work is distributed on the basis of class and Marx insisted that in any society with a class system there would always be a fundamental division between those who own the means of production (the ruling class) ...read more.

Alienation in Marxism is where the individual feels the world around them confronts them as something as hostile and threatening; they are not at home in it. ('The worker feels himself at home only during his leisure whereas at work he feels homeless.') His labour is no longer his own but is traded for money, thus leaving the worker with no interest in his work and also exercises no creativity. Workers are alienated in the workplace further when placed in specialised areas of production and are at the mercy of capitalism as they are driven into the factories to produce goods and services. Marx believed this was the principal evil of capitalism. ('His work is not voluntary but imposed forced labour'). Marx's criticisms of liberal democracy are based on the fact that it is fundamentally flawed and incapable of fulfilling its functions because of its link to capitalism. For example, Marx argued that you could never have a neutral state in a society with a class system. ...read more.

Despite this, Marx had pointed out in his theory of the state that freedom and equality don't seem to fit together well. Within western democracy, power resides in the hands of groups, mainly political parties but also interest groups. It is a matter of judgement as to whether these groups operate ion their own interests or, as a reflection of popular will. Democracy is supposed to be based on the sovereignty of the people and therefore government should be an expression of the people's will. Yet assessing the will is of the people is not easy since there is genuine dispute universally about what is right for society. The usual way around this is to say the will of the people is the will of the majority. By Marx's criticisms, liberal democracy is not the will of the majority as that would be the proletariat but is dictatorship of the bourgeoisie. Marx's criticisms of liberal democracy are still valid and applicable to the democracy of today yet are conceptualised slightly differently to adjust to modern developments in political structure. Katy Lucas Analyse Marxist Criticisms of Liberal Democracy October 02 ...read more.