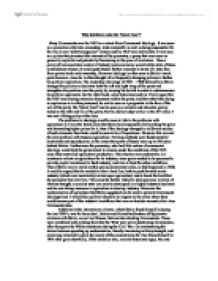 Why did Stalin make the &quot;Great Turn&quot;?

Why did Stalin make the "Great Turn"? Many Communists saw the NEP as a retreat from Communist Ideology. It was seen as a promotion of private ownership, trade and profit, as well as being responsible for the rise in new "petty bourgeoisie" classes such as NEP men and Kulaks. It was seen as a policy that promoted the interests of the peasantry, a group that were seen as generally capitalist and potentially threatening to the pace of revolution. Thus a policy of increased state control of industry and commerce would rid the state of these contradictory classes. It would push Russia further onwards in terms of a state free from private trade and ownership. However ideology is often seen as Stalin's weak point however, since he is often thought of as frequently changing policies to further his political aspirations. ...read more.

The problems in ideology could be seen to link to the problems with agriculture as it was the Kulak class that Stalin held responsible for hoarding the grain and demanding higher prices for it, thus if the ideology changed to rid Soviet society of such elements, then haste could be seen to be of importance. However this was not the only problem with Russian agriculture. Farming methods were fundamentally backwards and unproductive, to the extent that parts of Russia were up to 500 years behind Britain. Furthermore the peasantry, who had little notion of communist ideology, could hold the government to ransom under the conditions of the NEP, since they controlled agricultural production. This situation was undesirable in a country so reliant on agriculture for its industry, since grain needed to be procured to provide capital investment to fund industry, and also to feed the urban workforce. ...read more.

Britain and Poland had broken off diplomatic relations with Stalin, as well as Chinese Nationalists attacking Communists. These were combined with existing fears that the West were set on destroying Communism, after they gave the Whites assistance during the Civil War. On encountering the choice between speeding up modernisation, thereby increasing military strength, and remaining vulnerable and at the mercy of the peasantry (as the Tsar found himself in 1916 after grain shortfalls). If this situation was, as some historians argue, the case then Stalin stood up to the challenge and took decisive action, thereby initiating his "Great Turn" more quickly to deal with a hostile political climate. Therefore I conclude, that the need for security from invasion acted as a catalyst, in initiating Soviet reform of agriculture and ideology, although without the distinct inefficiency of Soviet agriculture or the mass discontent at the NEP, then this would not have been the case. ...read more.