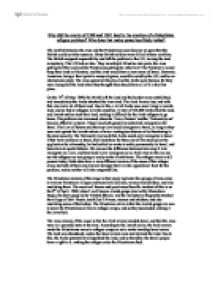 Why did the events of 1948 and 1967 lead to the creation of a Palestinian refugee problem? Why does that make peace less likely today?

Why did the events of 1948 and 1967 lead to the creation of a Palestinian refugee problem? Why does that make peace less likely today? The conflict between the Jews and the Palestinians soon became so great that the British could not take anymore. Many British soldiers were killed in these conflicts. The British resigned responsibility and left the problem to the UN, leaving the land completely. The UN had an idea. They would split Palestine into parts, the Jews getting half the land and the Palestinians getting the other half. The Palestine's would keep there land as Palestine, and the Jews would have a new name of Israel. However, Jerusalem, being a focal point to many religions, would be ruled by the UN, and be an international state. ...read more.

The Nationality Act said that Arabs could only immigrate to Israel if that Arab was born in Israel, had lived there for three out of five years prior the application for citizenship, he had settled or wants to settle permanently in Israel, and knew how to speak Hebrew. We can see the difference between how easy it is to immigrate as a Jew, and how hard it is to immigrate as an Arab. Due to this we can see the refugees are not going to easily make it back home. The refugee crisis is still present today. Both sides have a very different version of the cause of the refugee crisis, but both of them also believe strongly that it is the oppositions' fault for the problem, and so neither will take responsibility. ...read more.

According to the Jewish claim, the Arab armies made the Palestinians move to refugee camps so as to make invading Israel easier. The land was abandoned, and so the Israel armies won and claimed the land. Due to this, the Arabs potentially relinquished the land, and so therefore the Israeli people have a right to it, making the refugee crisis the Palestinians fault. In 1967, another war broke out between Israel and Arabs, and the Israeli people won again, and so took over the refugee camps. This meant that many people who fled from Israel in 1948 would now be under Jewish rule. We can see that this would make the refugee problem worse, for now the refugees have no freedom at all, and would have to do as the Jews say. We can easily see that due to many wars, the forcing out of Palestinians, and the capture and bad conditions of refugees, the Arabs and the Israelis were not going to live in peace together. ...read more.